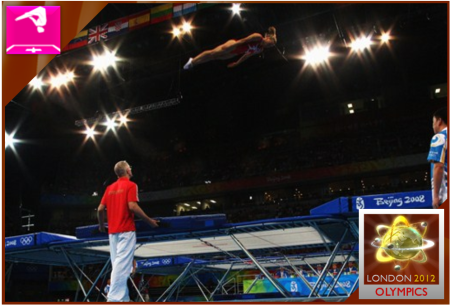 Prepare to be dazzled by the athletes in the Trampoline competition at the London 2012 Games, the newest of the three Gymnastics disciplines on the Olympic programme.

Since making its Olympic debut at the Sydney Games in 2000, the sport has consistently featured awe-inspiring displays of acrobatic excellence, with athletes jumping to heights of up to 10 metres.

Devised in the 1930s at the University of Iowa, the first modern trampoline was initially used as a training tool for tumblers, astronauts and athletes.

However, it grew in popularity to such an extent that in 1964 the first ever Trampoline World Championships were held at the Royal Albert Hall in London.

Kat Driscoll is Britain’s sole representative, but a good one – she topped the world rankings in 2011.

However, she earned that ranking at competitions where the dominant Chinese were absent. She finished last in the final of the World Championships, but fourth in January’s test event.

Reigning world and Olympic champion Lu Chunlong of China is the man to beat, with his wonderfully-named compatriot Dong Dong looking to depose him.

China’s He Wenna is world and Olympic champion in the women’s event. Canada’s Rosannagh MacLennan is her biggest threat.

Trampoline Gymnastics is a relative newcomer on the Olympic programme, making its debut at Sydney 2000.

Gymnasts perform a series of 10 skill routines, with a variety of single, double and triple somersaults with and without twists.

Each competition for men and women features two phases: the qualification round and the final round.

Precise technique and perfect body control are vital for success, with judges delivering marks for difficulty, execution and time of flight, minus penalties.

The eight athletes with the best scores advance to the final for one more voluntary routine of 10 different skills, which determines the results of the competition.

You can watch all the action from the Trampoline competition at the North Greenwich via one of the 24 dedicated BBC Olympics channels (details below).

This entry was posted on Saturday, January 1st, 2000 at 02:25 and is filed under London 2012. You can follow any responses to this entry through the RSS 2.0 feed. You can leave a response, or trackback from your own site.