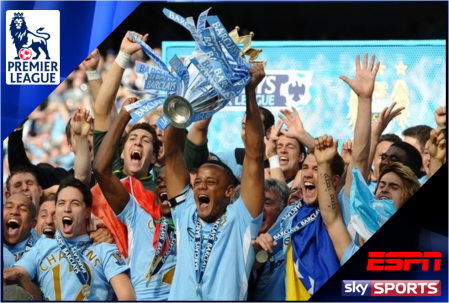 Sky Sports and ESPN have announced their opening live Barclays Premier League matches for the first four months of the 2012/2013 season.

The first televised match of the season will be screened by ESPN on the opening day of the campaign, with Newcastle United taking on Tottenham Hotspur.

Full details of which channel is covering what matches below:

Sky Sports have announced their first 42 televised Premier League matches to be shown exclusively live from August to November 2012, with every club featured by October 6.

Super Sunday kicks off the new season on Sky Sports with Wigan Athletic against Chelsea, followed by Manchester City against newly-promoted Southampton.

Sky Sports viewers will be able to watch all the biggest games between last season’s top eight teams exclusively live.

They will face each other 17 times including Liverpool v Manchester City on August 26 and Arsenal v Chelsea on September 29.

These fixtures are the first of 115 live Premier League matches that Sky Sports will show during the 2012-13 season, with every match available in HD, with many in 3D.

Barney Francis, Managing Director of Sky Sports, said: “We’re all looking forward to the start of the Premier League and we begin with a bang; Champions League winners Chelsea, Premier League Champions Manchester City and Manchester United all in our opening weekend.

“These selections provide our viewers with huge head-to-heads, major derbies and every team at least twice, all in the first three months of the season.

“We have the biggest names providing the most insightful analysis and commentary plus a wealth of unrivalled support programming.

“I’m sure it’ll be another fascinating football season on Sky Sports.”

Sky Sports viewers with Sky Go will be able to enjoy all the action wherever they want on PC, laptop, iPhone, iPad and compatible Android phones.

The match presents new Spurs boss Andre Villas-Boas with a testing first league match at the helm while Magpies chief Alan Pardew will want to send a signal that last season’s fifth-place was not a one-off.

Champions Manchester City will feature three times on ESPN as they welcome Queens Park Rangers on September 1, and Swansea City on October 27 to the Etihad Stadium, before they make an away trip to play newly-promoted West Ham United on November 3.

ESPN viewers will also get a look at Brendan Rodgers’ Liverpool side as they face Sunderland at the Stadium of Light on September 15th.

Manchester United make their first appearance on ESPN on September 29 as they host Tottenham Hotspur.

Arsenal will feature in the first of their three away fixtures on ESPN, first at West Ham United on October 6, before travelling to East Anglia to face Chris Hughton’s Norwich City on October 20, and then to Villa Park on November 24 to face an Aston Villa side under the stewardship of new boss, Paul Lambert.

“Alongside ESPN’s offering of top football coverage from around the UK and Europe, we look forward to the start of what promises to be another fantastic season of football on ESPN.”

This will be ESPN’s last season of covering live Premier League football, after being outbid for the rights by telecoms giant BT.

This entry was posted on Thursday, July 5th, 2012 at 12:25 and is filed under Football. You can follow any responses to this entry through the RSS 2.0 feed. You can leave a response, or trackback from your own site.