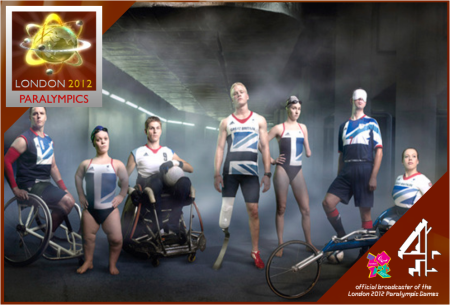 After years of working and waiting, countless months of heady anticipation, and weeks of building excitement, the London 2012 Paralympic Games have finally arrived.

Channel 4 will provide comprehensive coverage across all 12 days of competition, where viewers will witness unfettered sporting brilliance, courage, talent, triumph and tragedy, as dreams are made and broken in the cauldron of top class competitive sport.

The 2012 Paralympics will be the biggest event in Channel 4’s 30-year history, with almost 500 hours of live coverage will be broadcast during the twelve days of competition, marking the most extensive Paralympic Games coverage ever broadcast in the UK.

Multiple channels and platforms will broadcast live Paralympic sport on Channel 4, More4 and online at Channel4.com.

With up to 11 live sports all taking place at the same time, Channel 4 will take the role of directing viewers to the significant action.

Three further live streams will feature uninterrupted live coverage of events from across the Paralympic Games, on-air from early morning through to late evening.

Half of the presenters and reporters covering the Games for Channel 4 will be disabled.

Eight of the on-air team have come through our nationwide talent search carried out in 2010 to find the best new disabled presenters.

Viewers will also find their enjoyment of the sports on offer enhanced by Channel 4’s LEXI Decoder, a graphic system that will explain the classification system involved in Paralympic sport.

LEXI is made up of graphics which broadly illustrate disability types within sporting classes.

Channel 4’s Paralympics editor Deborah Poulton said: “We want to create a nation at ease with disability and leave a legacy of changed perceptions.

“The Paralympics allows us to turbo-charge that process with 11 days of coverage and it’s a great bonus that the Olympics was such a success on the BBC.

The London 2012 Paralympic Games will be the biggest, and hopefully the best, in history. Thousands of remarkable athletes will perform in some amazing venues in front of passionate and knowledgeable crowds.

Watch it all on Channel 4, and enjoy an extraordinary swansong to this once-in-a-lifetime summer of sport. It’s time to meet the Superhumans.

The London 2012 Paralympics starts on August 29 and Channel 4 will make history and broadcast the Games like never before.

It will be the biggest broadcasting event in Channel 4’s 30-year history and the most extensive UK coverage that has ever been dedicated to the Paralympic Games.

Channel 4 is promising to surprise and inspire during its daily broadcasts from the Olympic Park, with more than 500 hours of live coverage being show during the 12 days of competition – a 400% increase on the BBC’s Beijing 2008 coverage – accompanied by multiple television and online channels dedicated to showing all the best action.

London 2012 will dominate the Channel 4 schedules from 7am with the Paralympic Games Breakfast Show, to a 45-minute highlights show between 10.30pm-11.15pm.

Coverage will switch to More4 when not shown on the main channel, while three additional streams of live coverage on six dedicated channels will be available on the Sky, Virgin and Freesat platforms – three in standard definition and three in high definition, covering numerous sports across the event.

If you’re watching Freeview HD the same service will be available via the red button when you are watching the Channel 4 HD channel too.

All of the streams will be available to watch live on the dedicated C4 Paralympics website at channel4.com/paralympics.

Channel 4’s coverage of the Paralympic Games will be fronted by a ground-breaking on-air team. Half of the presenters and reporters in the Channel 4 line-up will be disabled – including eight new faces drawn from a nationwide talent search – and they will work alongside experienced and established TV sports anchors.

Coverage starts each day at 7am with the Paralympic Games Breakfast Show, presented by Rick Edwards and Kelly Cates, with a 45-minute highlights show between 10.30-11.15pm hosted by comedian Adam Hills rounding off each day’s coverage.

Jonathan Edwards will co-host the mid-morning show with Daraine Mulvihill, while Georgie Bingham will be joined by Arthur Williams, a product of Channel 4’s search for disabled presenters.

Established Channel 4 news anchors Jon Snow and Krishnan Guru-Murthy will front the coverage of the opening ceremony on 29 August and the closing ceremony on 9 September, both to be shown exclusively live on Channel 4.

Channel 4’s coverage of the London 2012 Paralympic Games is sponsored by BT and Sainsbury’s, both official partners of the event.

Hosted by Kelly Cates and Rick Edwards, the daily show covers the very best of all the great moments of the Games.

There are live injects from the main venues, analysis of the triumphs and heartbreak, and close-up features on the lives of the incredible athletes everyone is watching.

The Breakfast Roadshow segment of the programme treks the country to shine a light on the unsung heroes who’ve helped the athletes achieve their dreams. In the studio there’s a look at cybernetics, prosthetics and all manner of Paralympic paraphernalia.

The audience is invited to join in via tweets, texts and all forms of social media and there’s a wide range of studio guests.

Jonathan Edwards will be joined by Daraine Mulvihill, who was discovered in Channel 4’s disabled presenting talent search, to present Channel 4’s live coverage across a variety of sports from the Games each morning.

Among the sports regularly featured are athletics, swimming, equestrian and table tennis. From the pressure of the heats, to the drama and excitement of the finals, Channel 4 will be on hand to bring you closer to the competitors as they bid for Paralympic glory.

Cycling, wheelchair basketball, equestrian, wheelchair rugby football and table tennis are just some of the sporting disciplines that will take centre stage during each afternoon at the Games.

At 5.30pm every evening of the Paralympics make a date hosts Clare Balding and Ade Adepitan, featuring the swimming finals at the Aquatics Centre. The world’s finest swimmers hold centre stage in this hour with as many as seven gold medals up for grabs before 6.30.

Athletics kicks in soon afterwards as do the team sports such as Wheelchair Basketball and Sitting Volleyball.

Coverage switches to More4 on weekdays at 6.30pm & on weekends at 7pm.

Channel 4’s evening programmes will feature live sport from several Paralympic venues, including athletics at the Olympic Stadium and swimming at the Aquatics Centre.

Adam Hills presents an alternative review of each day at the London 2012 Paralympic Games, showing all the best gems of action and taking a sideways look at the intricacies of disability sport.

He will be joined each night by his eagle-eyed sidekick Josh Widdicombe, as well as guests from the worlds of sport and entertainment, to pore over the golden moments, confront some of the widely held views associated with Paralympic sport, and answer the questions viewers were always afraid to ask..

C4 Paralympics Extra is a new service that runs from August 30th to September 9th when there are countless thrilling events happening live at Paralympic Games venues.

All three channels will be available on Sky, Freesat, VirginMedia, and also on Freeview HD, and they will also be available to watch online via channel4.com.

If you have Sky, you can press the Red Button where you will be taken to a screen where you can choose between the three extra feeds.

Alternatively, you will also find these three feeds directly on the Sky TV Guide at channel numbers 450, 451, and 452.

Freeview HD will have access to one of the C4 Paralympics Extra channels, and viewers can press the Red Button while watching C4HD (channel 52) and a banner will pop-up that will allow you to switch between the extra video service and C4HD.

The extra Paralympics channels are not available on a standard Freeview box.

In addition to comprehensive TV coverage, Channel 4 will have a large multi-platform presence at the Paralympics, with additional coverage online via channel4.com/paralympics and through C4’s dedicated Paralympics apps for both mobile and tablet devices.

The website will also be the place for on-demand highlights of the major action as well as all the big news stories, live text commentaries, results and medal tables, individual profiles of all ParalympicsGB athletes, and video guides to particular sports.

Channel 4 has also announced the launch of dedicated Paralympics apps for both mobile and tablet devices – compatible with iOS and Android.

The apps, which will be free to download, will enable users to review the latest Paralympic action with comprehensive catch up clips of events. The tablet app will also allow users to watch live streamed action.

As part of its promise to deliver the most innovative and informative Paralympics coverage possible, Channel 4 introduces ‘Lexi Decoder’ (LEXI), a revolutionary new graphical system that will feature prominently during the broadcaster’s coverage of the Games.

Its aim is to aid the viewing experience of the Paralympics by debunking the often confusing classifications that govern Paralympic sport.

Research revealed that some viewers are confused by the disability classifications in Paralympic sports but would be more engaged with the Paralympics Games if they had a better understanding of why athletes with different disabilities compete against each other.

The easy to follow system is made up of colour coded graphics that illustrate disability types within sporting classes. Different types and levels of impairments are illustrated using of a colour palette: green denoting no impairment, yellow – mild, orange – moderate and red – severe.

The graphics will be used ahead of Paralympic races to indicate which disabilities are included in each specific classification sector, for example, a T44 race in the track in athletics or S6 in swimming.

The LEXI concept was originally created by Paralympic gold medal winning athlete, Giles Long and has the backing of the International Paralympics Committee, the British Paralympic Association and Seb Coe, Chair of the London Organising Committee of the Olympic Games and Paralympic Games.

LEXI joins Channel 4’s long-standing heritage in ground-breaking and innovative ideas, dating back to the introduction of Hawk-Eye and Snickometer technology in cricket.

Live radio coverage of the London 2012 Paralympic Games will be provided by BBC Radio 5 live and Radio 5 live sports extra.

All the major action from the Olympic Park will be on BBC Radio 5 live during each day of competition, with 5 live sports extra providing listeners with additional coverage.

John Inverdale will front the coverage across the day, joining Shelagh Fogarty for a special show between 12:00-14:00 on each weekday of the Games and he will also be bringing listeners the best of the action during 5 live Drive and 5 live Sport.

Paralympic gold medallists Baroness Tanni Grey-Thompson and Marc Woods will be giving their expert view on proceedings along with swimmer Kate Grey, who narrowly missed the cut for the London team, while presenter Russell Fuller will be among those leading the coverage on 5 live Sports Extra.

This entry was posted on Monday, August 20th, 2012 at 15:13 and is filed under London 2012. You can follow any responses to this entry through the RSS 2.0 feed. You can leave a response, or trackback from your own site.