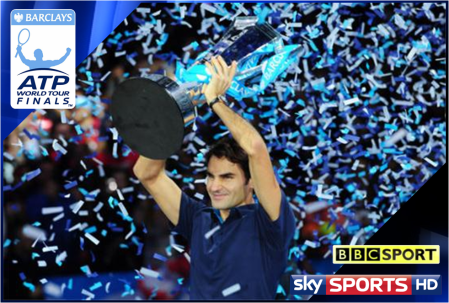 A thrilling year of tennis reaches its final set with the ATP World Tour Finals in London.

It’s the fourth staging of the traditional season-finale to the men’s tour at the O2 Arena, where the top-eight singles players and doubles pairings go head-to-head for the chance to claim most prestigious title in the sport outside of the grand slams.

Live coverage of the eight-day tournament begins on Sky Sports and BBC Sport on Monday, November 5.

The ATP World Tour Finals puts the top eight singles players and doubles teams from the Tour’s points list in a unique round-robin and knockout competition, where the winners receiving a hefty share of the £5.5m prize purse for their efforts.

Due to changes in the ATP Tour calendar, this year’s tournament runs from Monday to Monday.

Andy Murray plays in his first tournament on home soil since becoming the first British male Grand Slam singles champion for 76 years at the US Open in September.

Wimbledon champion Roger Federer defends the trophy he has won for the past two years.

Last year, he captured the 70th title of his career in his 100th final, a phenomenal landmark for one of the sport’s greatest ever players, after defeating Jo-Wilfried Tsonga for the second time in the competition.

World number one Novak Djokovic was the first to secure his place in the ‘Race to London’.

Ending the year ranked as the world’s best player, Djokovic will be the first player to achieve the feat in consecutive seasons since Federer achieved it four years running between 2004 and 2007.

The 2012 Australian Open champion will be officially crowned as the year-end world number one during a trophy presentation at the O2 Arena.

A high-profile absentee from this year’s event will be French Open champion Rafael Nadal, who has withdrawn due to a persistent injury to his left knee.

The world number four has not played a competitive match since his second-round loss to Lukas Rosol at Wimbledon earlier this year as he continues to struggle with knee problems, and also missed the London Olympics and the US Open.

In the double’s standings, the teams of Bob and Mike Bryan, Max Mirnyi and Daniel Nestor, Robert Lindstedt and Horia Tecau, and Leander Paes and Radek Stepanek are already assured of their places.

Following their incredible triumph in the men’s doubles tournament at Wimbledon earlier this year, Britain’s Jonathan Marray and partner Frederik Nielsen of Norway have been chosen as the wildcard entry.

Mirnyi and Nestor won the doubles title last year after they overcame Mariusz Fyrstenberg and Marcin Matkowski in straight sets.

The past 12 months of tennis has served up a host of unexpected stories and captured the imagination of fans across the world.

The ATP Tour witnessed four different grand slam champions, a host of upsets and emotional farewells as some of the sport’s biggest names entered retirement.

Andy Murray will arrive in London in the hope of winning the World Tour Finals for the first time in his career.

It would be the icing on a gargantuan cake for the British number one, whose achievements this year will live long in the sporting memory on these shores.

Murray became the first Brit to reach the men’s singles final of Wimbledon since Bunny Austin in 1938, a feat he followed with a gold medal-winning turn at the London 2012 Olympic Games.

And he saved the best for last, capturing his maiden grand slam title at the US Open after beating defending champion Djokovic in a thrilling final.

The sport’s top names will all want to sign off 2012 in style, and Sky Sports and the BBC will show live matches from every day of the week-long competition.

Details of how to follow the 2012 ATP World Tour Finals below:

Sky Sports is the only place to see every moment of the 2012 Barclays ATP World Tour Finals.

Every singles and doubles match will feature during Sky’s extensive high-definition coverage, presented by Marcus Buckland.

Terrestrial viewers will be able to enjoy live coverage of a singles match every afternoon throughout the week, plus the first semi-final on Sunday, and the final itself on November 12.

Sue Barker will present the BBC’s live coverage all week from the o2 Arena, which will be screened over the opening six days on BBC Two, BBC HD and via the BBC Sport website.

The singles final on Monday, November 12, is provisionally scheduled to be broadcast on BBC Three.

Commentary and studio analysis will be provided by Andrew Castle and Tim Henman.

BBC Radio 5 live will have extensive coverage of the tournament, with live commentary on every singles match on 5 live Sports Extra or the BBC Sport website.

This entry was posted on Monday, October 29th, 2012 at 19:44 and is filed under Tennis. You can follow any responses to this entry through the RSS 2.0 feed. You can leave a response, or trackback from your own site.