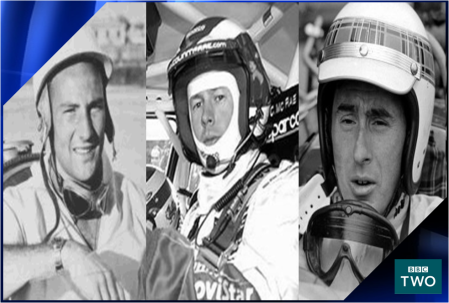 A new series celebrating the lives of three legendary names from the world of motorsport will be broadcast as part of BBC Two’s Christmas schedule.

Through a combination of revealing interviews with family and friends and fascinating archive footage, each celebrity will pay tribute to the racing legend by learning what made them great by spending time with them and the people who knew them best.

By charting the highs and lows, the victories and the near-death experiences, the enthusiasts will discover what it took to succeed in a dangerous era of motorsport.

In each hour-long episode, they’ll learn about the vehicles they drove, the engineering they employed and try to understand what put them in pole position.

Their ultimate mission is to emulate the legend by re-enacting one of their greatest-ever races, in a rare classic car.

With the original team of mechanics re-assembled, and the racetracks re-opened, this is the enthusiasts’ opportunity to remind the world just how special the racing legend really was.

The pair travel to Florence in a classic Mercedes to retrace the route of Italy’s most famous road race – the Mille Miglia – and discuss how Stirling’s near-fatal crash may have been the best thing that ever happened to him.

But how will Sir Patrick cope when he drives a 1957 Formula 1 car at the scene of Stirling’s historic British Grand Prix victory?

The pair take a road-trip through the Alps in a classic supercar to re-trace the life of Seventies icon, before self-confessed motor-racing fanatic James discovers how Sir Jackie’s relentless safety crusade lives on in the Formula 1 cars of today.

But will James prove himself capable of driving one of Sir Jackie’s Grand Prix-winning cars around the Formula 1 circuit in Monza?

Along with Colin’s father, Jimmy, himself a five-time British Rally Champion, Sir Chris visits the scenes of Colin’s greatest triumphs.

From exploring Colin’s roots as a Scottish trials bikes champ to driving the route of the Dakar rally over the dunes of the Sahara desert, Sir Chris retraces Colin’s wide-ranging career.

His father Jimmy speaks movingly about the tragic accident that claimed his son’s life, and the pride he has in his many successes.

UPDATE: This episode of the series was postponed from its original airing at Christmas due to rumoured “contractual issues” regarding the use of World Rally Championship footage in the documentary.

It will now air on Sunday, January 27, at 10pm on BBC Two, the same night that the new series of Top Gear begins.

This entry was posted on Tuesday, November 27th, 2012 at 21:23 and is filed under Motorsport. You can follow any responses to this entry through the RSS 2.0 feed. You can leave a response, or trackback from your own site.