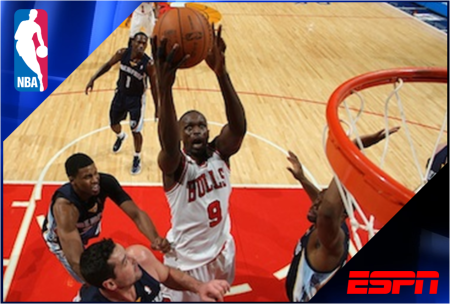 The NBA will be back on UK television screens after the league and ESPN announced a new agreement for live coverage of the remainder of the 2012-13 season in the UK and Ireland.

ESPN’s coverage begins this Thursday (December 6) with New York Knicks at Miami Heat, and the channel will bring basketball fans three live games per week throughout the remainder of the regular-season.

No UK TV deal was put in place at the beginning of the season in October, meaning fans missed out on watching the opening games on television and instead had to view them online via subscription on the NBA website.

There will also be coverage of the NBA All-Star Game, the first and second rounds of the NBA Playoffs, the Western Conference Finals, and the NBA Finals all exclusively live on ESPN next year.

The new UK deal comes after NBA Commissioner David Stern took a personal interest in ending the TV blackout, with just over a month to go until the first ever regular season NBA game to be held in London.

ESPN took over the live rights from Channel 5 in 2009, but the subscription broadcaster’s previous deal expired at the end of last season and was not renewed.

It is understood that NBA officials also held talks with previous NBA rights holders Sky Sports but were unable to reach an agreement.

Five live games have been confirmed for transmission on ESPN in their first week back covering the league, featuring some of the top teams and stars from around the league, including multiple members of the USA Basketball Men’s National Team that won gold at the London 2012 Olympics.

Texas and Western Conference rivals the San Antonio Spurs, with Tony Parker, Manu Ginobili and Tim Duncan, face off against the Houston Rockets on December 10.

This will be followed by the Knicks taking on the Brooklyn Nets in one of the league’s newest rivalries, and the 2011 NBA champions Dallas Mavericks face the perennial title contenders the Boston Celtics, with Rajon Rondo, Paul Pierce, Kevin Garnett.

This season, the UK is represented by nine-year veteran and NBA All-Star Luol Deng of Chicago Bulls and rookie Joel Freeland of Portland Trailblazers, as part of the league’s 84 international players from 37 countries.

Accompanying ESPN’s live coverage this season will be the channel’s US-produced studio shows NBA Tonight and NBA Countdown, providing round-ups of all the action from around the league.

More live games to be confirmed…

This entry was posted on Wednesday, December 5th, 2012 at 13:14 and is filed under Basketball. You can follow any responses to this entry through the RSS 2.0 feed. You can leave a response, or trackback from your own site.