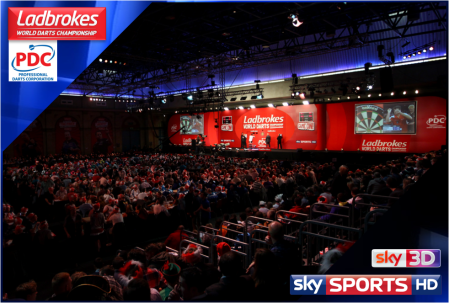 In addition to receiving the brand new trophy, the 2013 champion will also pocket a sizeable share of the £1m prize purse, the world’s biggest darts competition kitty.

The leading dartsman on the North American Pro Tour will also be in attendance, as will a representative from the Professional Darts Players Association, the DPA Australian Grand Prix champion, the Oceanic Masters title holder and a selection of qualifiers from the Asia.

Last year, Adrian Lewis became only the third player to defend the title after winning it for the first time the previous year.

Lewis goes into this competition as the second favourite for the crown, with the bookmakers backing his mentor Taylor to win his 16th world title.

Despite him not being as dominant as he once was in televised tournaments during 2012, the decision has no doubt been influenced by Taylor’s superb display in winning the Players Championship in the build-up to the tournament.

Following his shock quarter-final exit in last year’s world championship, the 42-year-old also took the 72nd and 73rd titles of his career in the Premier League and World Matchplay competitions, and still tops the PDC’s prize-money list.

There are plenty of other genuine contenders for this year’s crown.

The past 12 months have also seen huge victories for Robert Thornton, Simon Whitlock and Michael van Gerwen, with all three winning their first major televised PDC titles of their careers this year.

The familiar faces of 2012 Grand Slam winner Raymond van Barneveld and James Wade will also be in the mix and viewers can expect some unexpected names upsetting the odds.

Last year, Kim Huybrechts stole some headlines after reaching the quarter-finals of the competition.

After reaching the Players Championship final in Minehead just days prior to the start of the Worlds, where he lost to Taylor, the Belgian star could be one to watch out for to go on another famous run this year.

Other significant names who have qualified for this year’s event include the ever-popular Dennis ‘The Menace’ Priestley and Paul Lim, who hit the first nine-dart finish in a World Championship back in 1990 and plays in his first PDC Worlds since 2002.

For the 2013 PDC World Darts Championship, the tournament’s trophy has been redesigned and renamed ‘The Sid Waddell Trophy’ in honour of the great Sky Sports commentator.

Sid Waddell passed away in August 2012 and the new spectacular trophy will keep alive his memory as well as recognising his contribution to the sport of darts for over 30 years.

The new trophy stands at around 28 inches tall and weighs 25kg and will be presented to the 2013 PDC world champion by Sid Waddell’s son Dan on New Year’s Day.

The arrows will be gleaming under the thrilling lights of the oche, but who will shine brightest come the final on New Year’s Day, and have the distinction of being crownd the first sporting world champion of 2013?

Sky Sports is the only place to see all the drama unfold as it happens, with exclusive coverage of all 15 days from Ally Pally. starting on Friday, December 14, and concluding with the showpiece final on New Year’s Day.

Dave Clark hosts live coverage of each session, with expert analysis and commentary being provided by the likes of Rod Harrington, Wayne Mardle and Eric Bristow.

The Sky Sports darts website has all the latest news, features, video and information about the 2013 World Championships, and Twitter users can get behind-the-scenes pictures, news, live commentary and statistics by following the official Sky Sports Darts account – @SkySportsDarts.

Subscribers can also watch online streaming of every session via Sky Go, available on PCs, laptops, mobiles and tablet devices.

A preview show setting the scene for this year’s PDC World Championship, plus a repeat showing of the moving tribute programme ‘Sid Waddell – A Life in His Own Words’ will been broadcast in the build-up to the opening night on December 14.

The preliminary and first round will be held across eight sessions in seven days, with play commencing on Friday, December 14.

Each session will feature one preliminary round game and four first round matches.

The second round and the opening two games in the third round will take place before the Christmas break, with play resuming on Thursday, December 27, with the remaining six games from the last 16.

The quarter-finals, with two matches on each evening, take place on December 28-29, with the semi-finals on December 30 and the final being held on Tuesday, January 1.

This entry was posted on Sunday, December 9th, 2012 at 18:38 and is filed under Darts. You can follow any responses to this entry through the RSS 2.0 feed. You can leave a response, or trackback from your own site.