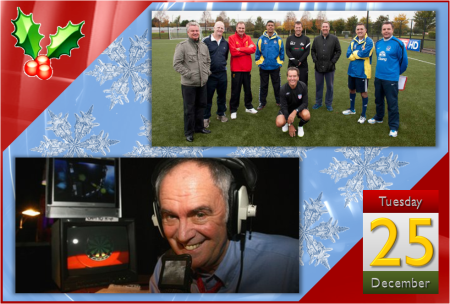 Sport On The Box’s Christmas Watch series returns for the festive period of 2012 as we guide you through all the must-see live sporting events, plus highlighting the best review shows and documentaries as this sensational sporting year draws to a close.

A bumper line-up of specials on Christmas Day across the Sky Sports channels includes Soccer AM and a review of the thrilling 2012 Ryder Cup.

Sky Sports News pays tribute to ‘the voice of darts’ Sid Waddell in a special half-hour programme, plus the BBC News Channel has its own review of the sporting year.

There is also some live sport on offer as India face Pakistan in a T20 cricket international, the Boxing Day test match between Australia and Sri Lanka begins at the MCG, plus there are three live games from the NBA’s traditional Christmas Day fixtures.

Max Rushden, Helen Chamberlain and the rest of the Soccer AM crew put on a Yuletide special of football fans’ favourite Saturday morning show.

They will bring you loads of highlights from the season so far, while they will also welcome a former Wigan, Fulham and Hull midfielder and a famous father and son into the studio.

Jimmy Bullard, who hung up his boots earlier this season, will be on the sofa, alongside veteran sports presenter Jim Rosenthal and his son, comedian and Friday Night Dinner star Tom Rosenthal.

As all three talk footy and get involved in the festivities, the Soccer AM team have got plenty more to keep you entertained, including Roland from Grange Hill returning for another eating world-record attempt, Wilcko performing ‘Oi Oi, it’s Franky Fryer’ and the Crystal Palace cheerleaders dancing in the car park.

There will be all the best goals so far from the Premier League, SPL and the Champions League, plus the finest strikes from the Championship, and Leagues One and Two.

Plus they will look back on the show’s best moments from the opening months of the 2012/13 series.

These will include Tubes’ question, Soccer AM’s Soccerettes, the funniest Third Eyes, Showboat, News with Pat, and the top goals and tricks from this season’s games at home and abroad.

At 10-6 down after the first two days, Europe’s chances of retaining the trophy they won so famously at Celtic Manor two years before looked improbable.

But that mindset was certainly not present in the thoughts of the 12 European players and their captain Jose Maria Olazabal as they entered the final day singles.

Inspired by the memory of Ryder Cup legend Seve Ballesteros, the European team managed to pull of one of the most sensational sporting upsets in front of a stunned American crowd at the Medinah Country Club in Illinois.

David Livingstone presents a full review of all the twists and turns from one of the greatest golf tournaments ever seen.

Generations of sports fans loved listening to the lyricism and wit of the legendary Sid Waddell and on Christmas Day, Sky Sports News will look back at his extraordinary life in Special Report – The Voice of Darts.

Rarely has a broadcaster been as inherent to the growth of a sport as Waddell was to darts, but his poetic one-liners and unbounded enthusiasm helped it transcend from pub game to global phenomenon.

It was Waddell who spotted the potential for the game as a television sport in the 1970′s and he was central to its growth throughout the 1980′s before the emergence of the PDC in the 1990′s.

When Waddell died last August, the sport was firmly established as an arena-filling behemoth and while he never expected the game he first enjoyed in a Yorkshire working man’s club to reach such giddy heights, his role in its expansion should not be underestimated.

He pushed forward the game on TV from its beginnings as part of the Indoor League show, developed the idea of the now-familiar split-screen camera shot and, perhaps most importantly of all, gave the sport a voice.

And what a voice! The self-styled “Geordie banshee” became synonymous with TV darts commentary and his brilliant one-liners were soon etched into the public consciousness.

As one fan noted on Twitter shortly after his death, it’s not often someone dies and everyone remembers them by laughing about all the funny things they said!

So join Special Report as they follow the journey of a miner’s son from the coalfields of the North East to the TV commentary box, via Cambridge University.

The programme will talk to those closest to him and relive some of his finest moments on TV, plus there’s a previously unseen interview with him ahead of his final commentary.

Join Jeff Stelling and a panel of star sporting guests on Christmas Day as Sky Sports looks back on 2012 – The Greatest Sporting Year.

After 12 months of sensational sport there’s plenty for them to discuss, including the most dramatic finish to a Premier League season as Sergio Aguero clinched the title for Manchester City with the last kick of the campaign.

After battling back from the brink against Napoli and stunning Barcelona, Chelsea conquered the Champions League with a famous victory over Bayern Munich in their own back yard.

Bradley Wiggins made history by becoming the first Briton to win the Tour de France and followed it up with Olympic gold just a few days later.

Thepanel will reflect on a magical summer in London, including that Super Saturday when Jessica Ennis, Mo Farah and Greg Rutherford delivered three golds in 45 minutes.

London 2012 produced even more magical moments when the Paralympics captured the imagination of the nation and made stars out of Jonnie Peacock, David Weir, Ellie Symonds and Sarah Storey.

From heartache in the Wimbledon final to golden redemption at the Olympics to becoming the first British male to win a tennis grand slam event in 76 years, it was quite a year for the Scotsman.

The Ryder Cup produced one of the most dramatic comebacks in sporting history as Jose Maria Olazabal’s European side roared back to retain the trophy.

There’s plenty more too, including a fantastic year for Rory McIlroy, Spain’s glory at Euro 2012 and a famous win for England’s rugby team over the All Blacks.

The programme will also hear from a range of sporting names on their own sporting highlights of 2012, and viewers will be asked to vote for their own moment of the year.

Sky Sports presents a look back at Andy Murray’s historic victory at the 2012 US Open.

The Scot defeated Novak Djokovic in a Monday final in New York to become the first British man since Fred Perry in 1936 to win a grand slam singles title.

In addition, you can relive all the drama as it unfolded at Flushing Meadows with a full replay of the men’s singles final on Sky Sports 2 from 4pm on Boxing Day. 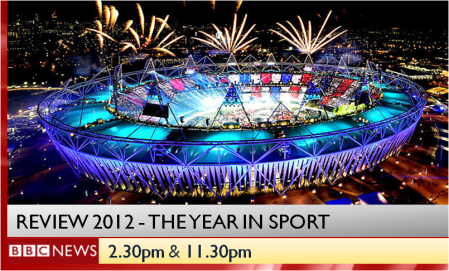 BBC News looks back on one of the most remarkable sporting years in memory.

From the Premier League’s dramatic finish to an amazing turnaround at the Ryder Cup, and of course the Olympic and Paralympic Games, 2012 was an unforgettable year in sport.

A new Sky Sports series featuring legendary sporting figures from the past and present in one-to-one conversation begins on Christmas Day.

Five years after their bilateral cricket ties were halted due to the Mumbai terror attacks, arch rivals India and Pakistan are set to slug it out once again on the cricket field.

The two-match T20 and three-match ODI series has been squeezed in between India’s ongoing full series against England, which has taken a break to go home for Christmas and New Year holidays.

India did well in the T20s against England after being humiliated in Tests but bowling remains a persistent headache for them in all the formats. Except for a spirited show put up by Ashok Dinda, none of the Indian bowlers made an impact on the English batsmen.

But it will be a tough test for Indian batsmen against Pakistan’s formidable pace attack, led by Umar Gul and Sohail Tanvir.

Not only the pacers but Pakistan have an extremely good spin attack in the form of Saeed Ajmal, Shahid Afridi and captain Mohammad Hafeez to choke the strong Indian batting.

Later in the day, the traditional Boxing Day test match begins at the MCG as Australia face Sri Lanka in the second of their three test series, the home side having won the first of them in Hobart by 137 runs.

ESPN has six live NBA matches over the festive period, including three tip-offs from the traditional Christmas Day fixture card.

The games include Boston Celtics at the Brooklyn Nets, New York Knicks against the LA Lakers and wrapping up the day is Oklahoma City Thunder at Miami Heat in a repeat of last year’s NBA Finals.

This entry was posted on Monday, December 24th, 2012 at 21:49 and is filed under Xmas Watch. You can follow any responses to this entry through the RSS 2.0 feed. You can leave a response, or trackback from your own site.