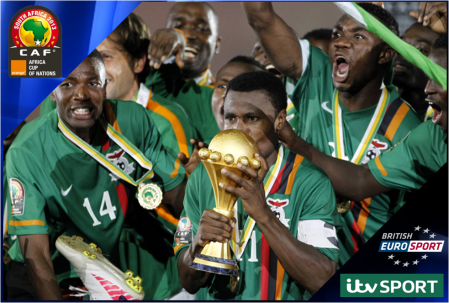 South Africa plays host to the 29th edition of the Africa Cup of Nations and you can see all the key games live on ITV4 and British Eurosport.

Africa’s three-week carnival of international football begins with hosts South Africa playing Cape Verde in the opening game at Soccer City in Johannesburg on January 19, with the final also set to be played there on February 10.

ITV4 will have live free-to-air coverage of 20 games, featuring every match from knock-out stages, while British Eurosport will screen all 32 games live during the competition.

Sixteen nations have qualified for the event, in which Zambia were the unlikely winners in 2012 after a penalty shootout victory over hot favourites Ivory Coast, securing their first ever African title.

After Drogba had missed a spot-kick in normal time, Zambia eventually edged the Elephants 8-7 in a highly dramatic shootout to end a three exciting weeks across Equitorial Guinea and Gabon.

The Ivorians are again the favourites to win Africa’s ultimate football prize in 2013, with the other giants from the continent including Ghana and Nigeria also expected to challenge strongly.

The 2013 tournament in South Africa is the first to be held in odd-numbered years since 1965 after organisers moved the competition so that it does not clash with future FIFA World Cups.

Having organised a successful World Cup in 2010, five of the main stadiums from that tournament will be used again for the 2013 Africa Cup of Nations.

In addition to Johannesburg’s Soccer City, which staged the last World Cup final, the other host cities are Durban, Port Elizabeth, Nelspruit and Rustenburg.

Ivory Coast are the strongly fancied to add to their tally of just one African Cup of Nations title as they boast a star-studded team consisting of players present in Europe’s elite clubs.

Among them include their all-time top scorer and former Chelsea forward Didier Drogba. Joining him up-front will be Arsenal’s Gervinho, as well as Wigan’s summer signing Arouna Kone.

In the heart of the midfield will be Manchester City’s Yaya Toure and Newcastle United’s Cheik Tiote, while Kolo Toure, also of Manchester City, sits further back in central defence.

Despite their obvious array of talent, they have been favourites for the last four tournaments and each time they have come up short.

The burden of expectation is potentially producing a mental block but their 2013 squad is perhaps the strongest they have ever fielded.

Tottenham’s Emmanuel Adebayor will also feature in South Africa after a last-minute intervention by the president of Togo’s football federation.

Togo have been in turmoil in the build-up to the tournament over the availability of the talismanic striker.

He was finally persuaded to play by the Togo president but did not participate in the pre-tournament preparations.

Drawn in a tough group with Ivory Coast, Algeria and Tunisia, Togo look likely to keep up their record of never having got to knockout stages of the tournament.

Ghana are likely to be one of the other stand-out performers, as they also possess players such as former Sunderland forward Asamoah Gyan and Juventus midfielder Kwadwo Asamoah.

They have not won the Africa Cup of Nations since 1982 and will be hoping to end the 29-year drought.

Two-time winners Nigeria are likely to call on the Chelsea duo of John Obi Mikel and Victor Moses to bolster their chances of success.

Nigeria are always a team with a chance of success and consistently make it through to the knockout stages, but they embarrassingly missed out on the last finals in Equatorial Guinea and Gabon and have a side who look lightweight in comparison to previous generations.

There are fewer Nigerians playing in Europe’s top leagues than in the past.

Zambia proved a surprise package in winning the last Nations Cup but took advantage of years of consistent team selection and also the fact they had not been rated as potential champions.

It will be completely different for them this time in the glare of the spotlight as they seek to defend their crown.

As for the hosts, South Africa might have regressed since the disappointment of not making it past the first round of the 2010 World Cup when they hosted the finals, but could ride a tide of emotive support if they get off to a good start and win over sceptical fans.

They have been hampered by injury setbacks but coach Gordon Igesund is confident they can still go on and win the title as happened the last time the tournament was hosted in South Africa in 1996.

Whatever happens, the next three weeks promise a great opportunity for African players to show off their talents and possibly catch the eye of some of the globe’s biggest club sides, who will no doubt be watching with great interest.

Details of how to follow the 2013 Africa Cup of Nations on ITV4 & British Eurosport:

ITV4 has significantly increased its coverage of the Africa Cup of Nations for the 2013 tournament.

In all, 20 live games will be shown on ITV4 and in high-definition on ITV4 HD.

With the exception of the opening day, ITV4 will screen all the matches which kick-off at 6.00pm during the first two rounds of the group stages, plus highlights of the day’s earlier match during the live broadcast.

In the final round of group stage fixtures from January 27 to 30, ITV will show one live match each day and highlights of the other game in the same broadcast.

“I’m really excited this tournament is being given such extensive coverage by ITV4,” presenter Matt Smith told ITV Sport.

“Just look at the top players from English clubs who take part – that shows the cup is increasingly important in world football.”

Niall Sloane, ITV’s Director of Sport said: “The Africa Cup of Nations is a major football event with an ever-growing following in the UK.

“I’m delighted that we’ll be offering viewers more free-to-air live coverage then ever before throughout the tournament on ITV4.”

All of ITV4’s live coverage will be simulcast online via the ITV Football website.

British Eurosport is the only place to see all 32 games from the 2013 Africa Cup of Nations in South Africa.

In addition to the live action, British Eurosport will also broadcast a daily 15-minute programme including reviews and previews of matches.

The British Eurosport website also has all the latest news, features, interviews and live updates from the tournament.

This entry was posted on Sunday, January 13th, 2013 at 17:27 and is filed under Football. You can follow any responses to this entry through the RSS 2.0 feed. You can leave a response, or trackback from your own site.