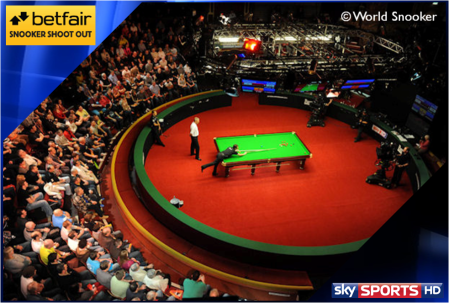 Barry Hawkins will begin the defence of his title when the Betfair World Snooker Shootout breaks into life at the Circus Arena in Blackpool from January 25-27, exclusively live on Sky Sports.

The fast-paced tournament sees 64 of the world’s best players step up to the baize for one-frame matches in a spectacular three-day knockout event with a hefty prize purse going to the victor.

This innovative quick-fire event was re-introduced by World Snooker in 2011 and features a shot-clock and a random draw, with all entrants chasing a top prize of £32,000.

Hawkins potted his way to the biggest title of his 16-year career so far after defeating former world champion Graeme Dott in the 2012 final.

The Englishman had already taken the notable scalps of Ding Junhui and Stephen Maguire on his way to the deciding frame.

Hawkins’ first round opponent for this year’s event will be the legendary Steve Davis, who fell at the first hurdle last year.

The six-time world champion failed to pot a ball as he was beaten by Mark Williams, but the most decorated snooker player in history is an old hand with the cue and more than capable of going far in this unique competition.

Following the conclusion of the first round, the draw for the last 32 stage will be made and all subsequent rounds will feature a random FA Cup style draw, giving lower-ranked players who progress into the latter stages the unique opportunity to compete against former world champions and major tournament winners.

“It’s great fun for the players and for the fans who come along, and when the arena is packed out, it generates such a buzz.

“The Betfair Snooker Shoot-Out has become one of the most widely anticipated events of the season so everyone should get their seats booked straight away.”

An impressive field has been assembled for the tournament in Blackpool, though are a few notable absentees including world champions Ronnie O’Sullivan and Neil Robertson, plus 2011 UK Champion Judd Trump.

Sky Sports will broadcast live high-definition coverage of every match from the event for the third year running in Blackpool across all its platforms.

The tournament runs from January 25-27 at the Blackpool Tower Circus Arena and tickets for all five sessions are still available. For further details call 0871 620 7052 or CLICK HERE.

This entry was posted on Monday, January 21st, 2013 at 00:02 and is filed under Snooker. You can follow any responses to this entry through the RSS 2.0 feed. You can leave a response, or trackback from your own site.