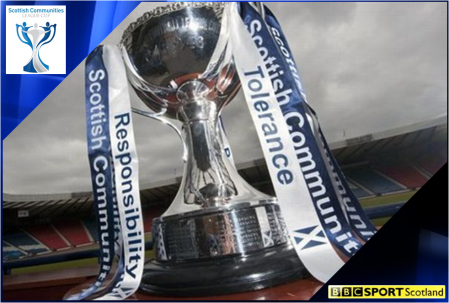 Hampden Park will be a sea of maroon, black and white as Hearts look to extend their recent major final form, whist St Mirren will be looking to banish the painful memories of 2010 with a monumental cup win to reward the Paisley faithful.

BBC One Scotland has exclusive live coverage of the final from the National Stadium on Sunday, March 17.

The drama is already under way with a ticket dispute erupting between the two clubs and the Scottish Football League.

With St Mirren well on their way to selling out their allocation and requesting the remainder of the allocation promised to them should they do so, the SFL in all their wisdom saw fit to hand the remaining 3,500 tickets over to the Edinburgh club.

The Paisley Buddies have never lifted this trophy so a win on Sunday would make history for them.

They have made two appearances in the final – they lost to Aberdeen 2-1 in October 1955 and in 2010 they were defeated 1-0 by a Rangers side who had two players sent off.

On the way to today’s final, the Tynecastle side defeated Livingston, Dundee Utd and Inverness Caledonian Thistle – the latter two by way of penalty shootouts.

Meanwhile Danny Lennon’s side put out Ayr Utd, Hamilton Academical, Aberdeen and had a famous victory over Celtic in the semi-final.

The outcome of the match is a difficult one to predict with both teams lodged in the bottom half of the SPL table.

The final is hot on the heels of a league meeting between the two sides, which resulted in a 2-0 victory for the Buddies and the departure of Hearts manager, John McGlynn, in the process.

With Saints fielding a significantly weakened team that night, many of theirs fans would have felt that the omens were on their side, after all,

Hearts could not cope with what was effectively a reserve team and Hearts looked a million miles away from the team who lifted the Scottish Cup at Hampden last May.

However, as many St Mirren fans know, things are never that straight forward.

St Mirren on the other hand have not picked up any major honour since a Scottish Cup win in 1987.

Rob Maclean presents all the action on BBC One Scotland from Hampden Park in League Cup Final Sportscene, starting at 2.35pm on Sunday, March 17, ahead of a 3.00pm kick-off.

He will be joined in the studio with special guests Scotland manager Gordon Strachan, Stoke City midfielder Charlie Adam, who helped St Mirren to get back into the SPL, and former Hearts manager Jim Jefferies.

Coverage is also available in high-definition on BBC One Scotland HD. Fans outside Scotland can watch BBC Scotland’s coverage via the BBC Sport website.

Highlights of the final will feature in Sportscene later on BBC One Scotland, presented again by Rob Maclean, which will also include the best of the action from the weekend’s SPL games.

This entry was posted on Thursday, March 14th, 2013 at 14:31 and is filed under Football. You can follow any responses to this entry through the RSS 2.0 feed. You can leave a response, or trackback from your own site.