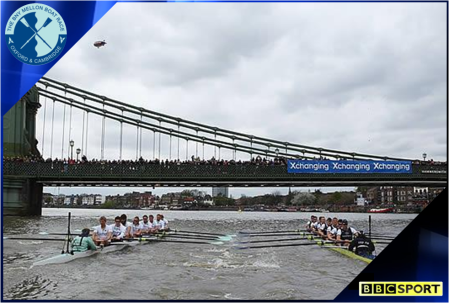 A national institution since 1829, one of the oldest sporting rivalries will resume in the 159th running of the annual varsity contest between Oxford and Cambridge along the testing four-mile course.

All the colour, sounds and atmosphere from the day’s events will be covered in a two-hour broadcast on BBC One and BBC One HD on Easter Sunday, with the 2013 BNY Mellon Boat Race set to start at 4.30pm.

Oxford will be hoping to banish the memories of 12 months ago and avenge last year’s dramatic and bitter defeat to Cambridge.

Few races in the event’s 180-year history have been as incident-packed as the 2012 edition, which was interrupted halfway through by a protestor in the water.

Cambridge went on to win following a restart although Oxford were disadvantaged after suffering a broken oar in a clash of blades shortly after the race resumed following the unfortunate interruption.

Additional safety measures have been introduced to avoid a repeat of last year’s disruption, in which protestor Trenton Oldfield was jailed for six months for causing a public nuisance.

This year the Oxford eight hold a 21kg weight advantage, but both crews can call upon a British Olympic medallist.

This year’s race will be umpired by four-time Olympic champion and former Oxford Blue Sir Matthew Pinsent, who will take charge of proceedings as umpire of the Boat Race for the first time having had the assistant’s role in last year’s controversial race.

The heaviest oarsman in this year’s BNY Mellon Boat Race will be in the Oxford crew.

Canadian Malcolm Howard – double Olympic medallist and the oldest oarsman in the Race this year at 29 – weighed in at 109.2kg.

First raced in 1829, the University Boat Race is one of the oldest sporting events in the world.

Watched by thousands along the banks of the Tideway, between Putney and Mortlake, and by millions more on TV around the world, the Boat Race is a unique sporting event.

With two very strong squads, expect to witness another great race this year.

Full details of how to follow the 2013 Boat Race on the BBC below:

BBC Sport is again in charge of broadcasting the University Boat Race – one of the most historic and iconic events in the sporting calendar, continuing a tradition and relationship that dates back almost as far as the race itself.

During the course of the two-hour broadcast on BBC One and BBC One HD, Clare Balding will present the build-up to the race with an array of special guests.

An eclectic mix of creative and entertaining features will provide an insightful look into the mindset and personality of the crews, plus the obstacles they have faced over the past 12 months in the build-up to the race, as well as the challenges they have yet to overcome over the gruelling four-1/4 mile stretch of water from Putney to Mortlake.

Over 20 land based cameras, satellite and communication relay stations and countless miles of cables along the route all combine to broadcast one of the most technically challenges that BBC Sport faces.

All of this, coupled with a helicopter camera, jib cameras, mini-cameras and a plethora of other innovative cameras, graphics, expert commentary and analysis strives to capture the atmosphere and drama of the race itself.

Race commentary is led by Andrew Cotter, who returns to the team in 2013 after missing last year due his Masters golf commitments.

Joining Cotter will be former Oxford coach Dan Topolski and Wayne Pommen, winner with Cambridge in 2004.

The broadcast will showcase the sense of occasion that welcomes 250,000 spectators to the banks of the Thames, with an excess of seven million UK TV viewers expected to watch the race.

Tens of millions around the world, from the Americas to Africa, can also watch the race as it unfolds as the corporation’s global channel BBC World News will join the main BBC One broadcast half-an-hour before the start of the race.

BBC One’s coverage will also include action from the Reserve Race between the Isis and Goldie crews, which takes place at 4pm – half an hour before main Boat Race begins.

Whichever shade of blue is rewarded with victory, the BBC team will be there to capture every stroke in the most dramatic and entertaining way possible.

BBC Radio 5 live will have full commentary of the Boat Race during 5 live Sport, presented by Ian Payne.

Live streaming of the BBC’s TV and radio coverage will be available via the BBC Sport website.

The pan-European broadcaster will take the BBC’s broadcast feed for the race, with commentary from Simon Golding and Alex Partridge.

This entry was posted on Friday, March 22nd, 2013 at 21:15 and is filed under Rowing. You can follow any responses to this entry through the RSS 2.0 feed. You can leave a response, or trackback from your own site.