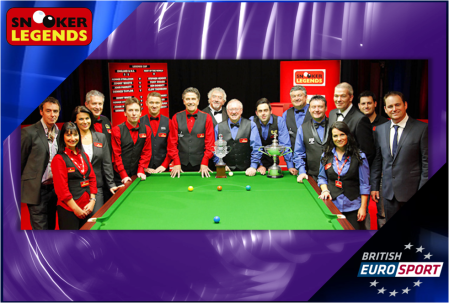 Following on from 17 days of World Championship drama at Sheffield’s Crucible Theatre, a selection of snooker’s great and the good will all be under one roof once again for a special event in London.

Featuring the likes of Ronnie O’Sullivan, Jimmy White and Steve Davis, British Eurosport will screen live action from the Snooker Legends Cup event at the Civic Hall in Bedworth on the weekend of May 11-12.

The rest of the world team will feature some of the best players in the history of the game.

There will be four sessions over the weekend hosted by John Virgo, all featuring action from singles and doubles matches in which each player will compete at least once a day.

Two of those sessions will be broadcast live on British Eurosport – the evening sessions on both Saturday and Sunday.

In the Eurosport commentary box, David Hendon will be joined by former world champion Joe Johnson.

For more details on Snooker Legends visit the official website

This entry was posted on Tuesday, May 7th, 2013 at 13:08 and is filed under Snooker. You can follow any responses to this entry through the RSS 2.0 feed. You can leave a response, or trackback from your own site.