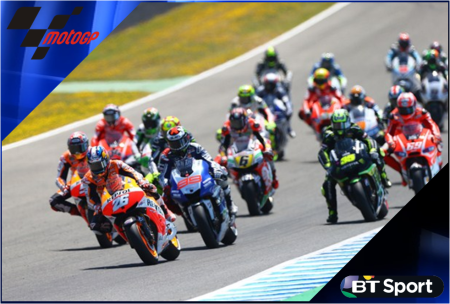 BT Sport has won exclusive rights to broadcast the MotoGP World Championship in a five-year deal starting from the 2014 season.

The agreement with promoter Dorna Sports will see MotoGP programming at the forefront of a quality line-up of top domestic and international sports on the new BT Sport channels, but means the championship loses free-to-air terrestrial coverage.

Motorcycle racing’s premier class will be part of this exciting new venture and will join other headline properties such as Premier League football and Aviva Premiership Rugby.

MotoGP fans will not miss a minute of the action as race weekends will be covered in full starting from the free practices on the Friday and including full coverage of Moto2 and Moto3 as well as the elite MotoGP category.

Coverage will be hosted on-site with additional studio coverage from BT Sport’s state of the art facilities at the Olympic Park in Stratford, East London.

BT Sport will create an exciting second screen experience, giving fans the ability to see races from the riders’ perspective and with more interactive features showing off the most technologically advanced bikes.

This will give the UK audience a whole new MotoGP viewing experience, immersing them in every aspect of the Championship.

The MotoGP line-up will be further enhanced by additional motorcycle-related programming in between Grand Prix weekends.

BT Vision and YouView viewers will be able to catch up on any live action they miss as BT Sport will make the programming available on demand, on television and on digital.

BT Sport will be heading into the world of MotoGP at full throttle, with extensive promotion across all media outlets including outdoor advertising, newspapers and magazines, as well as cross-promotion during its flagship football and rugby coverage.

The on-air line-up and presentation team will confirmed later this year.

Manel Arroyo, Dorna Sports Managing Director, commented: “We’re proud that MotoGP will be part of such a huge and exciting project as BT Sport.

“Our new partnership comes at the perfect time, with British riders flourishing in the Championship, and we look forward to our British fans being able to follow every single minute of the action.”

“We want BT Sport to offer a wide range of sports that appeal to many different audiences and MotoGP is a thrilling sport with a massive and committed fan base in the UK and Ireland.

“We believe existing fans will be thrilled with our comprehensive coverage and how we intend to develop the MotoGP brand and think we can also help the sport win many new fans.”

BT Sport football presenter and former BBC F1 host Jake Humphrey wrote on his website: “As a motorsport lover I was also so excited when I knew we might be able to pull off quite a coup and beat a number of other broadcasters to bag exclusive rights to Moto GP from 2014.

“I am certain we will give you the commitment, consistency and creativity you deserve from the sports’ broadcaster, and I think there is so much we can do to give you a better insight into Moto GP than you’ve ever had before.

“The way F1 is covered has changed beyond recognitionin the past few years and it’s time to bring much of that to Moto GP.

“Insight, analysis, breaking down the technical barriers, getting to know the riders – I think it can all be better and we’ll work really hard to make it the most comprehensive coverage you’ve ever had.

“Moto GP is so compelling, so exciting, and after 4 years in the F1 pit lane I know it deserves the best possible coverage.

“We are also well aware how much passion there is for bikes in this country and I want you to trust that we will do you, and the sport you love, justice.

“It was particularly great to have Monster Tech3 Yamaha rider Cal Crutchlow at our launch and he is really enthused about what BT Sport can bring to the table, as am I.”

BT Sport will be available for free for BT Broadband customers or for £15 to non-BT customers.

The BBC’s free-to-air coverage for the remainder of the 2013 season will be unaffected, with all races and some qualifying sessions available on either BBC One and BBC Two or the BBC Sport website.

Having regain the rights to the championship back in 2003 from Channel 5, the BBC has gradually increased its MotoGP coverage year-on-year.

Live qualifying sessions were introduced in 2005 via the Red Button, with further coverage of Moto2 (250cc) and Moto3 (125cc) classes in following years, along with more promotion and publicity for the BBC’s coverage.

After the series promoters attempted to secure exclusive free-to-air broadcasts in key territories, Dorna said in a statement that they would “always focusing first and foremost on free-to-air coverage to bring MotoGP to wider audiences”.

BT’s five-year deal results in the loss of MotoGP coverage on terrestrial television for the first time since 2000.

A BBC spokesperson said: “We are very proud of our Moto GP coverage and submitted a competitive bid to retain the broadcasting rights beyond our current contract.

“We believe that we have brought the sport to a new, wider audience.

“We would like to thank our production teams for the contribution they have made in raising the profile of the sport in the UK.

“We will continue to bring great content to our audiences for the rest of this season.”

Former BBC MotoGP producer Belinda Moore commented on Twitter: “I was lucky enough to spend many years as Series Producer on MotoGP for BBC Sport and want to pay tribute to a truly fantastic team.

Refering to the new BT Sport deal, the BBC’s Formula 1 presenter Suzi Perry, who fronted MotoGP coverage for a decade, also briefly commented on Twitter: “It’s all a great big shame for fans and ultimately the sport…”

British Eurosport’s contract with Dorna meant they showed all Moto3 and Moto2 races live with a delayed running of the MotoGP race.

“We are proud to have covered MotoGP for many years and thank our respected commentary team of Toby Moody, Julian Ryder, Neil Spalding and Steve Day along with the team behind the scenes for making that coverage so popular with bike fans.

“At British Eurosport we are passionate supporters of motorcycle racing and it continues to be a cornerstone of the channel’s output.

“In 2013, we added the Speedway European Championships and FIM Speedway Grand Prix to our offer of the MCE British Superbikes and World Superbike Championship.

“We will show every round of these four series live, in full and in HD until at least 2015 and we hold the exclusive live rights to those series in the UK.”

MotoGP’s commercial chief Carmelo Ezpeleta previously stressed the importance of retaining free to air exposure for the championship, but said BT Sport was better positioned to bring viewers an increased level of coverage and interaction.

He told Autosport: “We were looking for a partner to increase the visibility of our sport, and I think BT is the best place to develop in the future.”

“The market has changed, and the possibilities with BT are amazing.

“A big audience used to be the most important factor. Now customers want more.

“The BBC were very good to us, but this is exactly like the switch from 500s – we need to have something capable of growing with us.”

This entry was posted on Thursday, May 9th, 2013 at 11:43 and is filed under Motorsport. You can follow any responses to this entry through the RSS 2.0 feed. You can leave a response, or trackback from your own site.