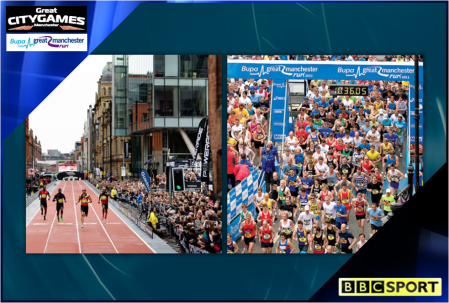 The fifth edition of the Great CityGames takes place on Saturday afternoon in Deansgate, situated in the heart of Manchester, as world class athletes from around the world go head-to-head in this unique athletics event.

It showcases the sport in a completely new format, providing an up close and personal experience for fans and giving those new to the sport the opportunity to experience the thrill of competition in an innovative and accessible way – all free of charge.

It’s the first opportunity for many British fans to see some of the medal winners in action since London 2012.

For the first time this year, both Olympic and Paralympic champions will race along the purpose-built 200m track in the city centre, while the city’s Albert Square plays host to the elite pole vault and long jump competitions.

Britain’s Jonnie Peacock will be the first Paralympic gold medallist to take to the CityGames track when he lines up in the IPC 100m, and Brazil’s Paralympic star Alan Oliveira will head the field in the IPC 200m.

Oliveira is increasingly regarded as the “face of the Games” by the public in his home country of Brazil, as it prepares to host the 2016 Paralympics in Rio de Janeiro.

Peacock, who has not competed since his heroic 100m T44 victory in the Olympic Stadium last September, will line up against Blake Leeper, the USA’s 200m T43 bronze and 400m silver medallist, Fourie and Dutchman Ronald Hertog, the T44 javelin thrower turned sprinter.

In the 200m hurdles, Olympic 400m hurdles champion Felix Sanchez will face competition from, amongst others, Britain’s Andy Turner.

All eyes in Albert Square will be on Britain’s Olympic long jump gold medallist Greg Rutherford.

Britain’s Stefanie Reid takes on Australia’s Kelly Cartwright, the athlete who beat her to gold in London last summer, in the women’s IPC long jump competition.

Top class international athletics continues on Sunday with the 2013 edition of the Bupa Great Manchester Run.

Since its inception in 2003, over a quarter of a million runners have taken part in what is one of the nation’s favourite 10k road races.

Originally conceived as a legacy event to the 2002 Commonwealth Games held in Manchester, the event has grown to the extent that this year 40,000 runners have entered.

Leading the men’s field is Ethiopia’s Haile Gebrselassie, who is aiming for an unprecedented fifth victory.

He faces tough opposition from the likes of Kenya’s Wilson Kispsang, the London Marathon winner in 2012.

Some well known and familiar faces from the world of sport and entertainment will also be taking part in the event.

One year on from his miraculous recovery after suffering cardiac arrest while playing for Bolton Wanderers, Fabrice Muamba will take on honorary starter duties for the race.

Jonathan Edwards will present coverage of both events with the CityGames on Saturday being shown on BBC One from 1pm, while the 10km Run on Sunday is on BBC Two at 10.00am.

Expert analysis on the CityGames comes from Colin Jackson and Denise Lewis, with commentary provided by Steve Cram and Paul Dickenson, while Phil Jones reports from trackside.

On Sunday for the Great Manchester Run, Paula Radcliffe joins Cram and Dickenson in the commentary box to provide expert analysis on the men’s and women’s races, while Denise Lewis and Phil Jones provide reports and interviews along the course.

Both events will be streamed live on the BBC Sport website and app, plus both programmes will available to watch shortly after transmission on the BBC iPlayer.

This entry was posted on Monday, May 20th, 2013 at 17:32 and is filed under Athletics. You can follow any responses to this entry through the RSS 2.0 feed. You can leave a response, or trackback from your own site.