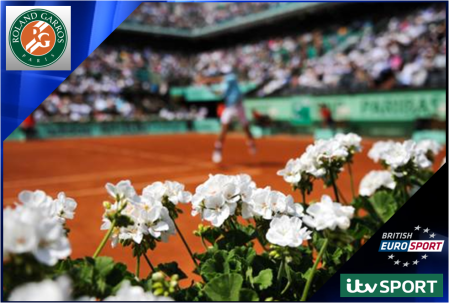 Roland Garros provides the grand stage for the greatest test of clay court tennis and second Grand Slam tournament of 2013 – the French Open.

Rafael Nadal and Maria Sharapova return to defend the singles crowns they won last year, while a host of big names will doing their best to claim clay-court tennis’ ultimate prize on the famous, dusty red courts of Paris.

Follow every serve, shot and slide on the famous clay courts of Roland Garros with live free-to-air coverage on ITV and ITV4, plus extensive daily output on British Eurosport.

The French Open has the women’s final it wanted as the two biggest superstars on the WTA Tour step out onto Court Philippe Chatrier with the aim of securing their second career Roland Garros title.

There is no doubt world number one Serena Williams goes into the match as favourite to beat Maria Sharapova for the 13th time in a row.

The American’s nine-year winning streak over her rival would be reason enough, but added to that is her remarkable current form, considered by many to the best of her already astonishing career.

Since losing in the first round at Roland Garros 12 months ago, the 31-year-old has lost just three matches and has been unbeaten in her last 30.

While Errani made only three unforced errors, she simply was not allowed to play by the powerful American, and Sharapova knows she must be at her peak for the whole match if she is to have a chance of winning a second straight title.

The Russian did win the first set when they met in Miami this year, one of only three she has managed since her last victory over Williams in 2004, but lost the third to love.

Williams has been a woman on a mission all tournament and will be desperate to add a second French Open title to the one that kicked off her Serena slam in 2002.

ITV’s live coverage will be presented by John Inverdale in Paris. Commentary will be led by Mark Petchey, while analysis comes from Lindsay Davenport, Sam Smith and Jim Courier, plus roving reports from Lindsay Hipgrave.

Over on British Eurosport, Rob Curling presents coverage alongside Virginia Wade and Ross Hutchins in the studio, with commentary by Chris Bradnam and Jo Durie.

ITV4 will have live coverage of the Legends Trophy from 2.40pm, featuring the men’s semi-finals and women’s final. In addition, the men’s doubles final, involving the Bryan brothers, will also feature following the conclusion of the women’s final.

The second Grand Slam tournament of the year concludes on the clay courts in Paris with an all-Spanish affair in the men’s singles final.

Rafael Nadal will bid for an unprecedented eighth French Open title after coming through a remarkable five-set battle over Novak Djokovic in the semi-finals.

The pair, who met in the final last year, have had some great battles over 35 meetings but their last four clash may have been the best of the lot.

Nadal was 4-2 down in the final set having been two points from victory in the fourth but refused to be beaten and leapt with joy as he celebrated his 58th win at Roland Garros from 59 matches.

His opponent in the final will be compatriot David Ferrer, who beat home crowd favourite Jo-Wilfried Tsonga with ease in straight sets in his semi final.

After five previous defeats in semi-finals over the last six years, the 31-year-old finally progressed successfully through to the last four and will make his first ever appearance in a Grand Slam final on his favourite surface.

Ferrer doesn’t possess the most impressive head-to-head record against Nadal and will be hoping to improve on the thrashing the Mallorcan gave him in last year’s semi-finals.

It was Nadal who reigned supreme over Djokovic with a 6-4, 6-3, 2-6, 7-5 victory, ensuring he claimed a seventh French Open title. Now he his firm odds-on favourite to secure a record eighth title.

ITV’s live coverage of the grand finale to Roland Garros 2013 will be presented by John Inverdale in Paris.

Match commentary will be led by Nick Mullins with analysis from Jim Courier, Fabrice Santoro and Mark Petchey, plus roving reports from Lindsay Hipgrave.

Over on British Eurosport, Rob Curling presents coverage alongside Virginia Wade and Ross Hutchins in the studio, with commentary by Simon Reed and Mats Wilander.

How to follow the 2013 French Open on ITV and Eurosport: 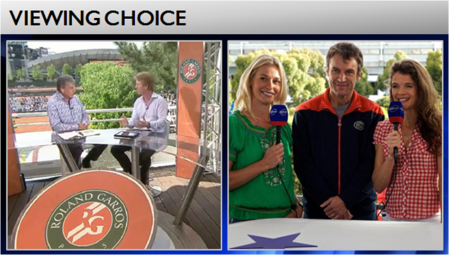 The tournament will dominate the ITV4 schedules over the course of the 15-day tournament with more than 150 hours of coverage, while the on-air team for 2013 is largely unchanged from 12 months ago.

Key matches including the mens’ and women’s singles finals, plus the opening two days of the tournament will be shown on ITV, while daily live coverage will be broadcast on ITV4 from at least 9.30am to 9pm.

New to ITV’s coverage this year is a regular evening highlights show which will be broadcast on ITV at or after 10.35pm each day (except on day one, ITV4).

John Inverdale returns as the lead presenter of ITV’s coverage where he will be joined by double French Open champion Jim Courier and a wealth of familiar names from the tennis world.

ITV will again base all of its coverage from a specially constructed studio in the heart of the Roland Garros complex, where the presentation team led by Inverdale will be based for the duration of the tournament.

Leading the commentary team will be Nick Mullins and Mark Petchey, who will be joined by former Grand Slam champions Amelie Mauresmo and Lindsay Davenport. Fabrice Santoro and Sam Smith will also again be part of the ITV commentary line-up.

Lynsey Hipgrave joins the ITV team this year and she will be the channel’s roving reporter and interviewer.

Further contributions in commentary will come from the world feed team of Guy McCrea, Wally Masur and Lucie Ahl.

Alongside terrestrial television coverage, ITV.com will simulcast all the action on ITV and ITV4 during the tournament.

As in 2012, ITV’s French Open coverage will be co-produced by ITV Sport and Input Media.

British Eurosport will again offer exhaustive coverage from Roland Garros with around 200 hours of live action.

Both its channels will both broadcast daily live high definition coverage, ensuring viewers can follow every smash, slice and ace as it happens.

He will be joined by former world number four and 1997 US Open finalist Greg Rusedski, and three-time Grand Slam winner Virginia Wade, with both offering expert analysis on each day’s play.

Hutchins will also be on-site from week two, providing daily reports and analysis with former British number one Annabel Croft.

The duo will use their expertise to provide analysis from the day’s play, and will be joined by the top stars throughout the tournament, bringing viewers the latest news and interviews.

Former world No. 7 Barbara Schett will also be part of the team and will bring the best interviews and reaction from right across Roland Garros.

For those who can’t get to a TV, the Eurosport Player enables viewers to watch live multi-court service, with video on-demand also available.

Eurosport Player subscribers can also access up to seven main courts live via the website and apps.

There will also be comprehensive coverage on the Yahoo Eurosport website, with up-to-date scores, reports, blogs, interviews and videos.

This entry was posted on Monday, May 20th, 2013 at 19:00 and is filed under Tennis. You can follow any responses to this entry through the RSS 2.0 feed. You can leave a response, or trackback from your own site.