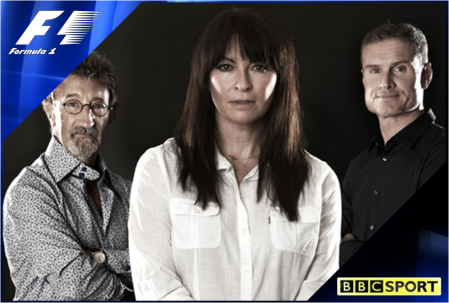 The BBC will bring all the Formula 1 action, news and interviews throughout the 2013 season across television, radio, online and mobile.

This year will see an increased live presence for F1 on network television as all three practice sessions during the BBC’s nine live races will be shown live for the first time on BBC Two and the new BBC Two HD channel.

Some new faces have been added to the BBC TV and radio presentation teams for the 2013 season, including presenter Suzi Perry, pit-lane reporter Tom Clarkson and Allan McNish, who joins BBC Radio 5 live as an expert analyst for at least six races.

END_OF_DOCUMENT_TOKEN_TO_BE_REPLACED

Suzi Perry has been announced as the new presenter of the BBC’s Formula 1 coverage.

The former MotoGP presenter will link-up with BBC favourites Eddie Jordan and David Coulthard for the entire 19-race season, starting in Melbourne on March 15-17.

The BBC have also confirmed the nine races that will be shown live on terrestrial television during the 2013 season, including the British, Belgian, Italian and the season-ending Brazilian Grands Prix, but the Monaco Grand Prix is not included as one of the live BBC races.

END_OF_DOCUMENT_TOKEN_TO_BE_REPLACED

Formula 1 on the BBC enters a new era in 2012, with the corporation aiming to build on its multi-award-winning coverage over the last three years and provide fans another compelling year of racing.

It is the first time since the sport returned to the BBC in 2009 that they will not be showing every race live on TV, after the corporation decided to approach Sky Sports to form a controversial shared arrangement last year.

But terrestrial viewers can still follow the entire 20-race season on BBC Television, with full live coverage of 10 grands prix, along extended highlights of the other 10 events throughout the season.