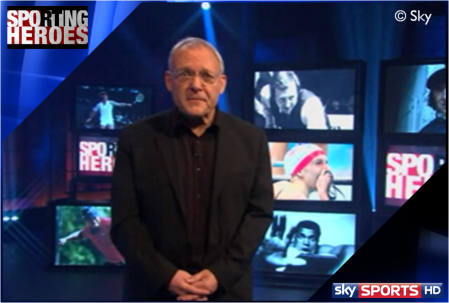 A new 12-part series on Sky Sports will take you up close and personal with some of the biggest stars in the world of sport.

Sporting Heroes invites a host of big names to take part in an hour-long interview to bring Sky Sports viewers an in-depth look at some of the biggest names from a variety of disiplines.

Veteran sports broadcaster Gary Newbon will introduce each episode and conduct three of the interviews in series, but in twist compared to most series of its kind it will be also asking sports stars to interview their own sporting heroes, bringing viewers an even more unique insight into their lives and careers.

END_OF_DOCUMENT_TOKEN_TO_BE_REPLACED

After 16 days of tense and exciting competition that will live long in the memory, the curtain falls on the 30th Olympiad in spectacular fashion with the traditional closing ceremony at the Olympic Stadium in the East End of London.

BBC One will broadcast live and uninterrupted coverage of the London’s closing ceremony as the city bids farewell to the Games, featuring an event that will pay homage to Britain’s illustrious musical heritage.

Beginning at 9.00pm, and featuring more than 4,000 performers, including 3,500 volunteers, the show is entitled ‘A Symphony of British Music’, and celebrates one of the nation’s greatest cultural exports over the past 50 years.

END_OF_DOCUMENT_TOKEN_TO_BE_REPLACED

Seven years after the announcement that the 2012 Olympic Games were to be held in London, the moment has finally arrived as the city hosts what promises to be a spectacular Opening Ceremony.

One billion people are expected to be watching worldwide as an 80,000 capacity crowd fills the purpose-built stadium in the East End for the official start of the 30th Olympiad.

The BBC will have build-up to this great occasion throughout the day across TV and radio, followed by live and uninterrupted coverage of the whole opening ceremony itself from 21:00 BST.