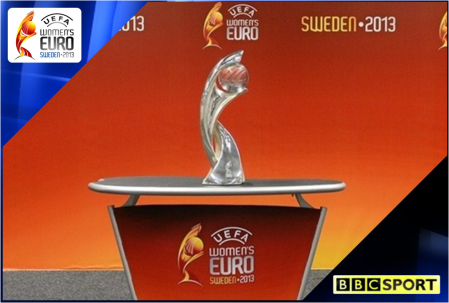 END_OF_DOCUMENT_TOKEN_TO_BE_REPLACED

The BBC has acquired the rights to broadcast every match from the 2013 UEFA Women’s European Championship in Sweden next summer.

The deal will see live coverage of every England match, plus both semi-finals and the final played out across BBC Two and BBC Three.

In addition, all other peak-time games will be broadcast on BBC Three.

END_OF_DOCUMENT_TOKEN_TO_BE_REPLACED

England will find out who they will face in the group stages at next summer’s UEFA European Women’s Championship when the draw for the 2013 tournament is made in Gothenburg on Friday.

Twelve teams have booked their place at the 2013 finals, including hosts Sweden, holders Germany and France, who have all been placed as the top seeds for draw.

You can watch full coverage of the draw as it unfolds inside the Svenska Mässan Exhibition and Congress Centre in Gothenburg on British Eurosport from 5.30pm, with updates on BBC Radio 5 live and the BBC Sport website, plus live streaming on the UEFA website.

END_OF_DOCUMENT_TOKEN_TO_BE_REPLACED

England Women’s international friendly against France in Paris on October 20 will be broadcast live on BBC Three.

This will be the Three Lions’ first outing since they secured their place at next summer’s European Championships by beating Croatia 3-0 last month, and Hope Powell’s side will be looking to lay down an early marker ahead of the tournament against opponents sure to figure strongly at the finals.

END_OF_DOCUMENT_TOKEN_TO_BE_REPLACED 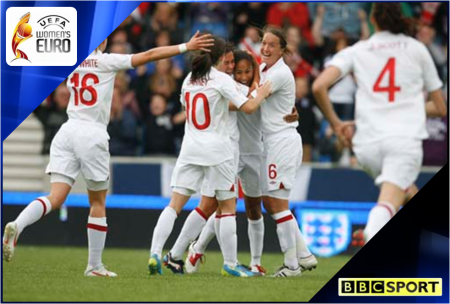 England Women’s vital Euro 2013 qualifier against Croatia will be broadcast live on the BBC.

Maintaining the momentum of a sensational year of sport, and following on from the high-profile Olympic campaign for the Team GB women’s team, the match at Walsall’s Banks’s Stadium will be shown live on BBC Two and the BBC Sport website on Wednesday, September 19.

A win will take Hope Powell’s team to the top of their group and secure automatic qualification for the European Championship next year in Sweden.