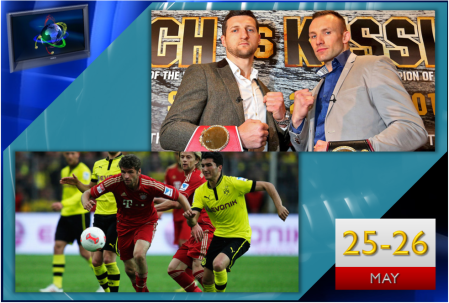 Sport On The Box presents a comprehensive guide to when and where to watch your favourite events this weekend.

With so many great sporting events taking place over one bumper weekend – from Froch v Kessler II to the UEFA Champions League Final, Monaco Grand Prix to French Open tennis and the Aviva Premiership Final to Wentworth’s BMW PGA Championship, it is all set to be a unmissable 48 hours for armchair fans.

END_OF_DOCUMENT_TOKEN_TO_BE_REPLACED

As the world cycling season progresses into May the first Grand Tour of the season gets into gear as Italy plays host to 96th edition of the Giro d’Italia (May 6-24).

Sir Bradley Wiggins will be aiming to add a second Grand Tour title alongside the Tour de France crown he won last summer as he attempts to make more sporting history by becoming the first Briton to claim the coveted maglia rosa.

British Eurosport will screen daily live coverage from every stage of the 2013 Giro d’Italia, while Sky Sports will provide nighly highlights of the event for the first time this year.

END_OF_DOCUMENT_TOKEN_TO_BE_REPLACED

Eurosport has announced an extension and enhancement of their long term partnership to cover all major Italian cycling races for an additional four years.

The deal covers 2013 to 2016 and involves TV and digital rights for the Giro d’Italia as well as five other major Italian races, including the Milan – Sanremo, the Giro di Lombardia and Tirreno-Adriatico.

As part of the new four-year deal, there will be extended and upgraded live production and broadcasting of the races in high-definition for the first time.