The glory days of British motor racing are to be celebrated in a new BBC Four series which buffs up some of the BBC’s most memorable coverage from the sport’s earliest days.

‘Motor Racing at the BBC: That Petrol Emotion’ is a five-part series which tells the compelling story of the early days of Formula 1 – from the 1950s through to the 1970s – courtesy of images from the BBC archives.

From track to paddock to a changing Britain beyond, and driven by a powerful period soundtrack, this new series is motor racing’s version of ‘Rock ‘n’ Roll Years’.

END_OF_DOCUMENT_TOKEN_TO_BE_REPLACED 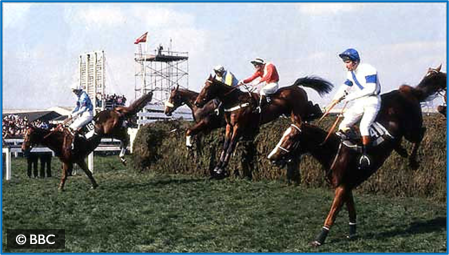 It’s the biggest horse race in the world and one of British sport’s greatest spectacles.

The 165th running of the breathtaking John Smith’s Grand National takes place tomorrow, with the race being broadcast live for the final time on BBC Television to an anticipated audience of more than 10 million viewers.

Aintree’s flagship race has produced a colourful array of stories throughout its illustrious past, and as BBC TV bids farewell to the Grand National after 52 years, Sport On The Box looks back at some of the race’s most iconic moments during that time.