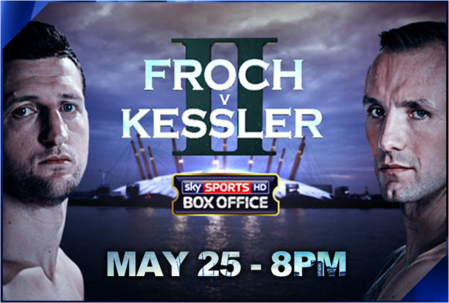 After months of verbal battles and endless hype, it’s time for the talking to stop on May 25 as Carl Froch touches gloves with Mikkel Kessler in a huge world title-unification fight at the O2 Arena in London.

The super-middleweight rematch brings Europe’s finest face-to-face again a full three years since they went toe-to-toe in an absolute classic in Denmark.

Froch is putting his IBF super-middleweight title on the line while Kessler defends the WBA strap and the fight can be seen live via pay-per-view on Sky Sports Box Office for £14.95.

END_OF_DOCUMENT_TOKEN_TO_BE_REPLACED

It’s an important night in the fighting career of Amir Khan as he looks to restore his reputation with victory over Carlos Molina, a fight which will be broadcast exclusively live on Sky Sports.

Five months on from his shock defeat to Danny Garcia, the British light-welterweight steps into the ring against his unbeaten American opponent in Los Angeles this Saturday night (December 15) for a fight he has openly admitted will make or break his career.

Also on the night, George Groves defends his Commonwealth super-middleweight title against the veteran Glen Johnson as part of a bumper fight night at London’s ExCeL arena which also features Billy Joe Saunders and five title fights in total – all live on subscription channel BoxNation.

END_OF_DOCUMENT_TOKEN_TO_BE_REPLACED

Carl Froch makes the first defence of his IBF super-middleweight title against Yusaf Mack at the Capital FM Arena in Nottingham, exclusively live on Sky Sports and Sky 3D on November 17.

‘The Cobra’ defends his world title against the Philadelphianat in front of his home fans at the Capital FM Arena in Nottingham, a fight which the top of Betfair’s ‘True Brit’ bill, and the 35 year old has promised a powerful display in his ninth consecutive World title fight.

There will also be a host of preview programming building up to the big fight, including special editions of Ringside featuring Froch and former undisputed world heavyweight champion Mike Tyson.

END_OF_DOCUMENT_TOKEN_TO_BE_REPLACED 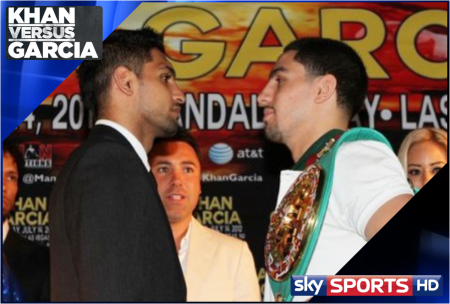 A difficult few months for Amir Khan finally come to a head as he faces Danny Garcia at Mandalay Bay in Las Vegas on Saturday night.

Sky Sports will be the only place to see the Bolton fighter face Danny Garcia for the WBC and WBA light-welterweight championship.