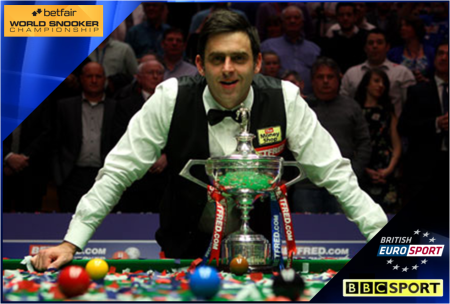 Snooker’s greatest prize is up for grabs in Sheffield as the city plays host to 17 days of slow-burning tension and drama with 32 of the world’s finest players going head-to-head for the 2013 World Championship trophy.

Last year’s winner Ronnie O’Sullivan returns to the Crucible Theatre to defend his title, marking his high-profile comeback to the sport following self-imposed break, and is among the favourites for glory despite having played just one competitive match since his Sheffield triumph last May.

BBC Sport and British Eurosport will have comprehensive coverage of the 2013 Betfair World Championship across all platforms, with the tournament starting in Sheffield on Saturday, April 20, running until May 6.