CYCLING: Tour Down Under 2013 – Live on Sky Sports 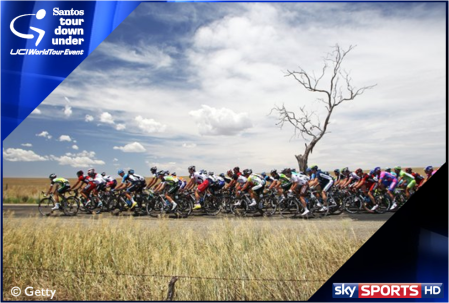 The 2013 road cycling season begins in Australia as a selection of the sport’s top riders gather for the 15th Santos Tour Down Under, with extensive coverage on Sky Sports from January 20-27.

The 2013 edition of Australia’s six-stage competition takes riders on a 758km journey in search of the distinctive Ochre Jersey around the picturesque city of Adelaide, concluding with a 20-lap race on the city’s council street circuit.

Sky Sports will screen extensive coverage of the opening event of the 2013 UCI World Tour with all six stages of the race to be broadcast live for the first time.

END_OF_DOCUMENT_TOKEN_TO_BE_REPLACED

ITV4 and British Eurosport will have comprehensive coverage of the 99th edition of the greatest cycle race on the planet – the Tour de France.

Some of the world’s best riders will contest the sport’s most prestigious event over the course of three intense weeks of racing, with Australia’s Cadel Evans returning to defend the yellow jersey that he claimed for the first time in his career 12 months ago.

From the prologue in Liege on June 30 to the final stage between Rambouillet and the Champs-Elysees in Paris three weeks later, ITV4 and British Eurosport will have all the action from this unique sporting institution.