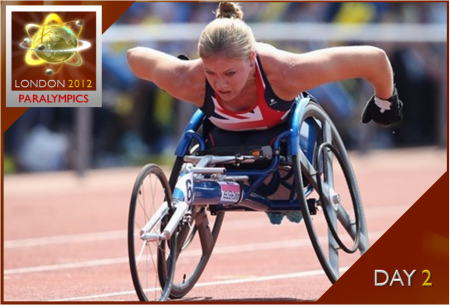 Three more sports begin their Paralympic competitions on the second day of the London Games, including the start of the athletics programme inside the Olympic Stadium.

Double world champion ‘Hurricane’ Hannah Cockroft (above) will battle for gold in the T34 100m wheelchair race; while in the Velodrome, Jody Cundy and Jon-Allan Butterworth go head-to-head in the newly-combined C4/5 1km time trial.

END_OF_DOCUMENT_TOKEN_TO_BE_REPLACED

Get ready for one of the busiest days of the London 2012 Games with 24 sports in action throughout the day, including the beginning of the athletics competition, regarded as the flagship event of every Olympics.

Exactly a week on since the Olympic Stadium staged one of the most memorable opening ceremonies of recent Games, the serious action inside the 80,000-seater venue, as more than 2,000 athletes compete in 47 events over the next 10 days, making athletics the largest single sport at the Games.

British fans will be closely following the fortunes of Jessica Ennis as she begins her quest for Olympic glory in the heptathlon, which opens up proceedings inside London’s Olympic Stadium.

END_OF_DOCUMENT_TOKEN_TO_BE_REPLACED 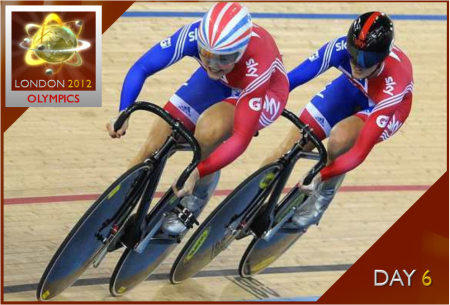 Medals could come in a variety of sporting disciplines for Great Britain on day six of their home Games.

At the top of that list comes track cycling in the new state-of-the-art Velodrome inside the Olympic Park, where Team GB’s star names will to build on from the momentum following Bradley Wiggins’ superb victory on the road time-trial.

END_OF_DOCUMENT_TOKEN_TO_BE_REPLACED 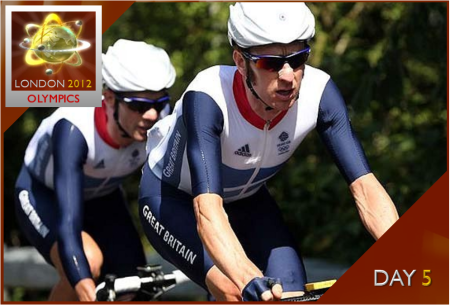 After mixed fortunes in the road cycling races on the opening weekend, the focus of attention from an expectant home nation returns on Great Britain’s cyclists to deliver in the men’s and women’s individual time-trials.

Tour de France winner Bradley Wiggins, who won two out of the three time-trials on his way to an historic first victory for GB in the race barely two weeks ago, will be the leading British gold-medal contender in the men’s race, while 2010 world time-trial champion and 2008 Olympic silver medalist Emma Pooley will carry the hopes in the women’s race.

END_OF_DOCUMENT_TOKEN_TO_BE_REPLACED 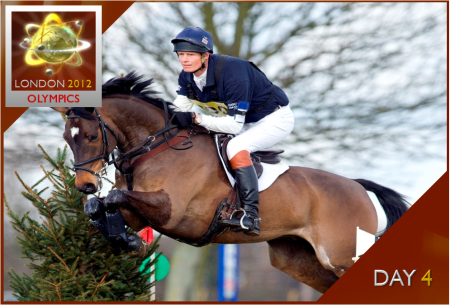 London 2012 enters its fourth day of competition and there is plenty to enjoy from a British perspective throughout the day.

Forty years have passed since GB last won team eventing gold, but this is their strongest team in generations. The team final begins at 10.30am on BBC One with the individual final, where British hopes are also high, to follow.

William Fox-Pitt (above) will be a strong contender in the individual final, with German Michael Jung is aiming to achieve an unprecedented hat-trick – by winning the World, European and Olympic titles in the same year.

END_OF_DOCUMENT_TOKEN_TO_BE_REPLACED

The first Monday of the London 2012 Games introduces one of Great Britain’s key protagonists for Olympic glory.

Tom Daley dives for a medal with partner Pete Waterfield in the men’s 10m platform synchro event in the Aquatics Centre, starting at 3pm on BBC One.

Zara Phillips and her GB eventing team-mates will be in action during the sport’s dramatic cross-country stage in Greenwich Park throughout Monday afternoon, then Britain’s men’s gymnasts will go for a team medal, after making the final of this event for the first time in 88 years, from 4.30pm.