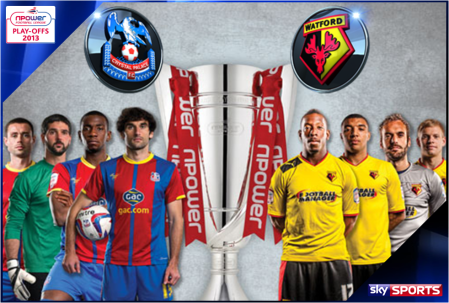 The final lucrative place in the 2013/14 Barclays Premier League season will be claimed at Wembley Stadium as Crystal Palace take on Watford on Monday afternoon.

Ian Holloway’s Palace side eased past Brighton 2-0 over two legs in their semi-final and while Gianfranco Zola’s Watford reached Wembley through a thrilling 3-2 aggregate win over Leicester City.

Sky Sports will screen the match, worth a reported £120m to the winner, exclusively live on Monday, May 27, with free-to-air highlights in the evening on BBC One.

The most lucrative prize in world football will be up for grabs at Wembley with Watford and Crystal Palace having bought their tickets for the sporting lottery of the play-offs.

Both sets of supporters will be keeping everything firmly crossed that their numbers come up at the national stadium in the climax to the 2012/13 domestic season.

After eight months, 48 games, 4320 minutes of competitive action and countless twists and turns, just one game stands between two clubs and the riches on offer at the Premier League top flight party.

Going into the final matchday of the season, just three points separated Hull City and Watford in the battle for automatic promotion.

Hull faced league champions Cardiff City at the KC Stadium while Watford, who held a far superior goal difference to the Tigers, played host to Leeds.

The Hornets could not make home advantage count, however, and slipped to a 2-1 defeat.

There was plenty of salt rubbed into the wounds when Cardiff snatched a late equaliser at Hull.

Had Watford beaten a Leeds side who had taken just four points from their last 12 games on the road, they would now be part of English football’s elite division.

Instead, they joined Leicester City, Brighton and Crystal Palace in the play-offs desperate to prove the blood, sweat and tears of the last nine months were not shed in vain.

The final sees Crystal Palace manager Ian Holloway leading a side out at this Wembley fixture for the third time in four years.

Palace reached the final when the Manchester United-bound Wilfried Zaha scored a brace in a 2-0 away win against Brighton & Hove Albion after a goalless draw in the first leg.

Meanwhile, Watford bounced back from narrowly missing out on automatic promotion by overcoming Leicester City in dramatic fashion.

Troy Deeney scored a last-gasp injury-time winner on the counter attack after Manuel Almunia had saved a penalty at the other end just moments before.

The two sides have endured a tough adventure in getting to Wembley and a lucrative place in the Premier League awaits the winner, while another season battling it out in the second tier of English football is the reward of the loser.

Sky Sports is the only place to see live coverage of the 2013 Championship Play-Off Final from Wembley Stadium.

Simon Thomas will introduce coverage from the national stadium where he will be joined in the studio by special guests for expert analysis and comment during the afternoon, including Peter Beagrie, Iain Dowie and Andy Hinchcliffe.

The four-hour broadcast will be shown on Sky Sports 1 HD and also be shown in 3D via the Sky 3D channel, with a full one-hour of build-up and previews ahead of kick-off at 3.00pm.

Coverage will also be available to watch online via mobiles, laptops and tablets on Sky Go and on the Sky Sports for iPad app.

BBC One will screen terrestrial highlights of the final in the last edition of The Football League Show this season.

Manish Bhasin presents action from the Wembley as Crystal Palace and Watford contested a place in next season’s top flight.

He will be joined for analysis in the the studio by Steve Claridge and Mark Bright, while commentary comes from Guy Mowbray.

The programme will be broadcast at 11.05pm on Monday evening and will be available to view for up to seven days after transmission via the BBC iPlayer.

This entry was posted on Friday, May 24th, 2013 at 13:43 and is filed under Football. You can follow any responses to this entry through the RSS 2.0 feed. You can leave a response, or trackback from your own site.