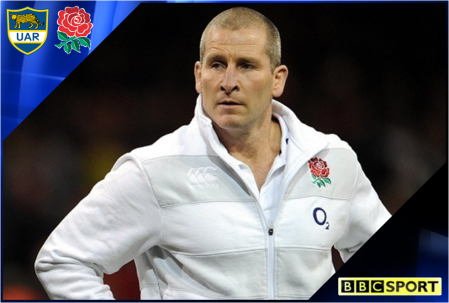 The BBC has secured the rights to broadcast England’s two Tests against Argentina in June.

Stuart Lancaster’s team travel to South America, minus their British & Irish Lions contingent, for what will be their first two-match series against the Pumas in Argentina since 1997.

BBC commentator Brian Moore, who is covering the forthcoming Lions Tour with talkSPORT, confirmed that the corporation had picked up the rights to screen the tw0-test series from the Argentine rugby board UAR.

He announced via Twitter: “England rugby fans – the 2 Argentina Tests will be on BBC c8.00pm on the respective Saturdays. Both games live on BBC2.”

Official confirmation came soon after from the BBC themselves, with the first test on June 8 scheduled for live broadcast on BBC Two at 7.30pm ahead of a 8.10pm kick-off.

Jason Mohammed will present live coverage of the first test from Salta, while John Inverdale hosts the second match held in Buenos Aires a week later.

The two sides last met in South America in June 2009, when current England captain Chris Robshaw won his first cap in a 24-22 defeat at the hands of the Pumas, in a match which was only covered on UK television in a late-night highlights on Channel 5.

England narrowly beat Argentina in their previous encounter, a pool stage match at the 2011 Rugby World Cup, in Dunedin courtesy of a late try from Ben Youngs.

With a number of England’s elite players involved with the Lions squad, 11 uncapped players have been named in their squad for this summer’s South America tour.

Captained by Northampton Saints flanker Tom Wood, the tour party includes five players who are 21 or under, the youngest of whom is London Wasps number eight Billy Vunipola.

Chris Robshaw, Danny Care, Toby Flood, Brad Barritt and Chris Ashton – all absentees from the Lions squad – are among those who have been rested for Argentina tour, giving England coaches the opportunity to try out some fresh faces.

Despite some key absences, Stuart Lancaster can still call on the likes of Mike Brown, Joe Launchbury and Billy Twelvetrees, who were regulars in the squad during this year’s Six Nations.

Philip Bernie, BBC head of TV Sport said: ‘We know that there is always a keen audience to watch England’s rugby internationals, so we’re delighted to be covering their two Tests in Argentina, who will provide a strong challenge.

“This adds to our considerable regular portfolio of international rugby live on BBC television.”

Sophie Goldschmidt, RFU Chief Commercial Officer, said: “We are delighted that the two upcoming England Tests will be broadcast live on the BBC giving all England Rugby fans the opportunity to support the team during the prime time TV coverage this June.

“Stuart Lancaster has taken a young squad to South America and exciting talent will be on show as England aim for their first series win in Argentina since 1981.”

England’s contests with Argentina forms part of a busy period of international rugby union, headlined by the British & Irish Lions Tour of Australia which is exclusively live on Sky Sports from June 1 to July 6.

Elsewhere, there are plenty of internationals involving the home nations taking place across the world.

Six Nations champions Wales fly to Japan for a two-test series with both matches live on terrestrial television.

BBC One Wales will cover the first test in Osaka on June 8 (also available nationwide via BBC Red Button) and S4C will screen the second test in Tokyo a week later.

Scotland travel to South Africa to play three matches as part of a quadrangular tournament which also involves Samoa, Italy and the Springboks. Every match from this series will be screened live on Sky Sports.

Ireland embark on a two-test tour of North America, facing the United States and Canada respectively. UK television coverage of these two matches has yet to be confirmed, though they will be covered in Ireland by TG4.

This entry was posted on Wednesday, May 29th, 2013 at 20:15 and is filed under Rugby Union. You can follow any responses to this entry through the RSS 2.0 feed. You can leave a response, or trackback from your own site.