Defending champion Webb Simpson will no doubt be determined to become the fifth, and may even see himself as having a slight advantage over his challengers.

Having previously competed here in the 2005 US Amateur, the American is one of few active players to have experience of the suburban Pennsylvania course.

Simpson’s 2012 success came at the Olympic club in San Francisco, where he held off the challenge of compatriot Michael Thompson and Northern Ireland’s Graeme McDowell.

The latter’s failure to sink a 25-foot putt on the 18th saw Simpson win by one and become the 15th different major winner in a row.

It also made him the ninth straight first-time winner and the third consecutive American to take top honours in one of the season’s four most prestigious tournaments.

A host of top players will be hell bent on taking Simpson’s crown, including current world number one Tiger Woods.

The outrageously prolific American recently claimed his fourth title of 2013 with a two-stroke victory at the Players Championship.

Previous world number one Rory McIlroy is also likely to be among the frontrunners.

He may still be looking for his first tournament win of the year, but the prodigiously talented Northern Irishman is always capable of mounting a challenge.

Beyond that, other people’s picks may include four-time major winner Phil Mickelson and Brandt Snedeker, a man who began the year with three top-three finishes in his first four starts before winning on his fifth.

Merion, in suburban Pennsylvania, has not hosted a major championship for 32 years and had seemed destined for the status of forgotten gem on the US golfing calendar, with Australian David Graham the last winner there in 1981.

To the credit of the USGA, they’ve put class before cash and decided to return to a venue which has a storied history.

Bobby Jones won US Amateur titles there in 1924 and 1930 while Ben Hogan famously captured the US Open in 1950, just 16 months after a near-fatal road accident.

For the 2013 edition, Tiger Woods, Rory McIlroy and Master champion Adam Scott have all been put together in an all-star group for the first two rounds of the tournament.

The tournament is scheduled to start on time after volunteers were drafted in to help groundskeepers get the course ready after a period of recent poor weather in Ardmore, causing organisers to put plans in place to use two holes on the adjacent West Course if necessary.

Despite the weather concerns, once again a host of British and European players will be pushing for honours across the Atlantic against America’s finest desperate to take advantage of home support in the 113th US Open.

Follow the 2013 US Open on Sky Sports. Full details below: 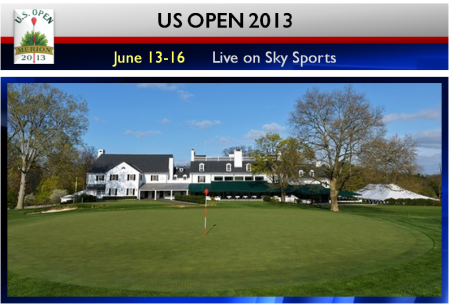 The second major of the golf season is upon us and Sky Sports will bring viewers full live coverage of the 2013 US Open.

Coverage begins on Wednesday (June 12) at 7.00pm on Sky Sports 1 with a special preview show – ‘The Story of Merion’ – presented by Sky Sports commentator Bruce Critchley.

Then tune in for all the live action from the East Course from Thursday through to Sunday, all presented from a special studio overlooking the course by David Livingstone.

Comprehensive analysis and debate through the weekend will be provided by Butch Harmon and Colin Montgomerie, while Ewen Murray, Bruce Critchley and Rob Lee lead the commentary team.

On-course reports and interviews throughout the tournament will come from Howard Clark and Tim Barter.

Sky’s 35 hours of live coverage gets under way at 2.00pm on Thursday (June 13) on Sky Sports 2 HD, with play concluding each night at around midnight.

Pennsylvania is five hours behind the UK, so timings will be more fan friendly than last year’s US Open in San Francisco, when the champion wasn’t crowned until the early hours of the morning.

If you miss any of the action, you can catch up with a new round-up show at 3.00am each night/morning or via extended highlights every morning across the Sky Sports channels.

If you can’t get in front of your TV then you can watch the action on the move on your laptop or mobile device with Sky Go, or if you are not a Sky subscriber you can purchase a Sky Sports Day Pass via NOW TV.

Sky Sports News have updates from Merion GC with regular reports and interviews from around the course.

Viewers can also get all the breaking news, live scores, course guide and additional information about the tournament via Sky’s dedicated US Open website.

BBC Radio 5 live will have commentary and updates during the 2013 US Open in Pennsylvania.

Iain Carter leads the 5 live team for live coverage of the final two rounds with the commentary commencing at 9pm each night.

Text commentary, live audio and updates can also be found via the BBC Sport website.

This entry was posted on Monday, June 10th, 2013 at 15:34 and is filed under Golf. You can follow any responses to this entry through the RSS 2.0 feed. You can leave a response, or trackback from your own site.